The funeral service for Eva “Blitz” H. Priebe will be held at 10:30 a.m. Saturday at St. Theodore Catholic Church, Albert Lea. The Rev. Timothy T. Reker and Deacon Mike Ellis will officiate. Visitation will be from 4 to 6 p.m. Friday with a prayer service at 5:30 p.m. at Bonnerup Funeral Service and one hour before service at the church. Interment will be in the St. Clara Cemetery, Clara City. 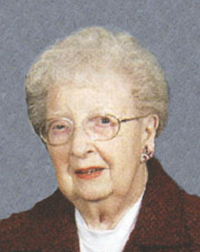 Eva was born in Louriston Township on Jan. 30, 1916, the daughter of August F. and Margaret I. (Fritz) Donner. She graduated from Clara City High School and attended Teacher’s College in St. Cloud. She was married to Bernard Priebe on Aug. 25, 1956, in Degraff. Eva had lived in Clara City, Albert Lea, and Marshall, Mo., for 20 years and returned to Albert Lea in 1995. She was a member of the St. Theodore Catholic Church. She was active in her church and had been president of the Altar Guild and had also served as president of Church Women United in Marshall, Mo. Eva had worked at J.C. Penny in Albert Lea.

Eva had been president of the Legion Auxiliary from 1963 to 1974, president of Welcome Wagon in Marshall, Mo. Served on the Hospital Auxiliary in Albert Lea and Marshall, Mo., and was in the Knights of Columbus Auxiliary. Eva enjoyed working and volunteering. She had served as funeral chairperson in the Catholic Church in Missouri, and worked for the priest in Missouri and Albert Lea.