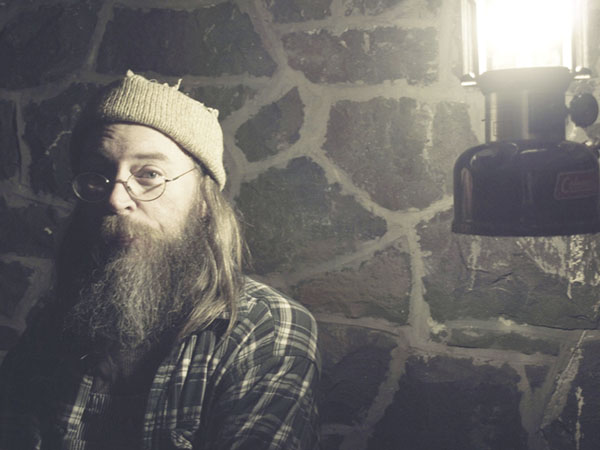 Charlie Parr, shown here in a publicity photo, is a favorite among the fans of Minnesota-based roots music. The Austin-born folk singer resides in Duluth. -- Submitted photo

Charlie Parr is a humble man.

The Austin-born folk singer has had his share of ups and downs, and right now he’s enjoying some serious success.

His 12th album came out in mid-December, and his booking schedule is full through much of next year. He recently contributed to the Minnesota Beatles Project, playing “Rocky Raccoon,” in the old ragtime way he loves. At 43-years-old, he’s tearing up music charts in Australia and Europe with his American folk blues sound. And he is known throughout Minnesota’s vibrant roots music scene.

Needless to say, Parr is doing pretty well. Not that you’d know, if you talked to the warm and pleasant fellow.

“I like to keep it in perspective,” Parr said.

Parr is winding down after a big year, where he toured in Australia and Ireland, as well as released an album or two. His newest is a gospel compilation called “Keep Your Hands on the Plow,” with his wife, Emily, along with members of Low and other musicians at the Sacred Heart Music Center in Duluth, the city in which Parr resides.

“It’s all traditional material, anywhere from before the Civil War right up to the ’30s or ’40s,” he said.

Songs range from “Daniel in the Lion’s Den” to “East Virginia Blues.”

The album’s confessional feel contrasts from his prior album, “When the Devil Goes Blind,” which has foot-stomping, guitar-picking tunes like “Ain’t No Grave Gonna Hold My Body Down” and “Turpentine Farm.”

Parr got his love of gospel, old-time country and blues from his parents, who had a giant collection of acoustic and country-heavy music. The music seeped into him, apparently.

“It’s kind of visceral,” he said. “That was the best thing that I had ever heard in my life.”

Yet Parr didn’t exactly have a music career in mind. He did so-so in school, until he dropped out of Austin High School during his sophomore year. Parr spent several years unfocused and playing a little music before getting his General Education Development diploma and enrolling at Augsburg College in St. Paul. He would spend seven years working toward a philosophy degree.

“I left high school in 10th grade, and I hadn’t exactly paid attention in school,” he said.

His liberal arts experience served him well, as he began outreach work helping the homeless. He worked in the Twin Cities and Duluth, but he started to burn out about eight years ago.

“I was working a lot for the outreach agency and was getting stressed,” he said.

At the same time, he had started playing in several clubs and entertainment venues in the Twin Cities area. His wife suggested he take a break from outreach work to focus on his music for a while.

“I was thrilled to hear that,” he said.

The rest is history. Parr worked on his sound, made connections and is able to earn a living now as a folk singer. His music has taken him to Australia, where a filmmaker he knew used his music for a commercial that gained popularity. It has taken him to Ireland and the European mainland, too.

“People over there, especially people in Ireland, are really into American folk music,” he said. “A lot of people who play over here will end up touring over there.”

Parr ends up doing quite well in the United Kingdom, where a compilation of his earlier hits, “Cheap Wine,” was recently released. He can fill some mid-sized music halls and sometimes takes his two children along.

“The BBC has been really kind to me,” he said. “I don’t have anything to complain about.”

Parr is taking a bit of a hiatus and enjoying time with his family. He used to be a stay-at-home dad for his children before they were school-age, but nowadays he’s just happy to be around when he can.

“I like to be with my kids more than anything, and so it’s important to me to take some time off,” Parr said. “This past year, I’ve decided to take some opportunities that came along my way. I took them, and they were great.”

So great that Parr spent his December at home. He’ll soon be on the road, however. He’ll spend Saturday at the Cedar Cultural Center in Minneapolis performing and celebrating “Keep Your Hands on the Plow.”

From there, he’ll tour around the tri-state area until March, when he goes back into the studio in Cannon Falls to work on a record he hopes to get released this summer. The closest he’ll be to Albert Lea is Mankato, where he will play at Halling Recital Hall at Minnesota State University on Thursday. His records are also available on iTunes.

Parr hopes his success will last for quite some time, but he also thinks he may return to outreach work at some point. Yet the music calls him and he still loves to play.