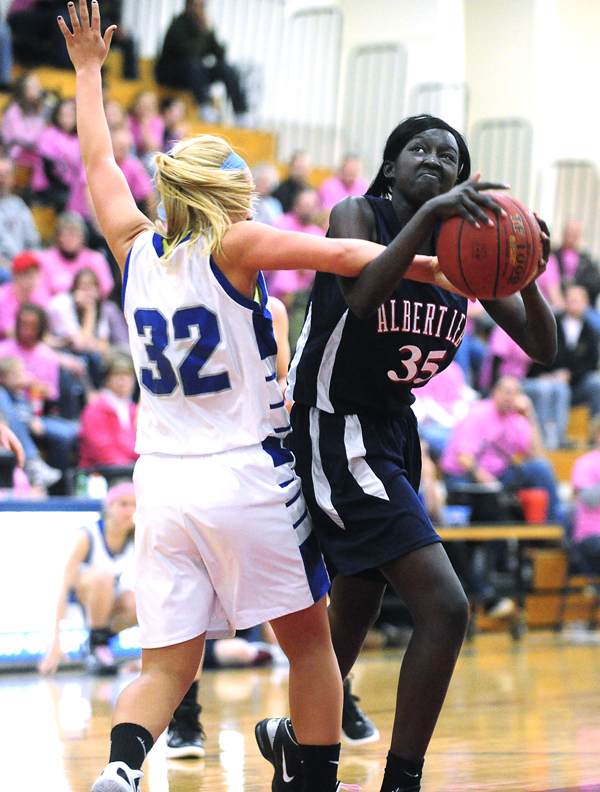 Albert Lea’s Nya Chan, right, wrestles for the ball on Tuesday against Owatonna’s Madison Eggermont in the first half. -- Brandi Hagen

The bottom of the net was prime real estate on Tuesday night as Albert Lea and Owatonna’s girls’ basketball teams watched its layups roll off the rim and jumpers rattle in and out.

The difference was at the free throw line, where the Huskies buried shot after shot until it buried the Tigers 60-45. 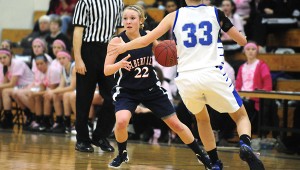 halftime, the Huskies made 26 of 31 free throws in the second half to notch its seventh win in the Big Nine Conference and maintain third place in the standings.

The Tigers, meanwhile, were denied its second conference win as it shot 12 of 27 from the free throw line and 15 of 57 from the field.

Owatonna finished 32 of 41 from the foul line.

“Free throws killed us,” Tigers coach Cassie Gorman said. “And that’s too bad because we work on free throws a lot, and we’ll keep working on them.”

While the Tigers’ offense never got going in a stop-and-go second half — it made just four field goals over its first 14 minutes — it had the conference-contending Huskies reeling after a strong finish in the first.

Owatonna (10-6, 7-3 Big Nine) jumped out to a 7-2 lead just 2:15 into the game before Albert Lea held it without a field goal for nearly seven minutes. But the Tigers were unable to capitalize off its stingy defense because of turnovers on offense and still trailed 10-6 with 7:45 left in the half. 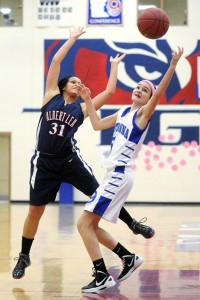 Albert Lea’s Brittani Zuniga (31) is blocked by Owatonna’s Amy Filzen during the second half of a 65-40 loss. -- Brandi Hagen

A free throw by sophomore Bryn Woodside got the Tigers’ offense going, and a jumper by Brittani Zuniga and steal and layup by Woodside in less than a minute gave Albert Lea (2-15, 1-9) its first lead, 11-10, and forced an Owatonna timeout.

Sydney Rehnelt scored two points and Ashley Tewes five, including a 3-pointer to cap a 12-0 run that pushed the Tigers’ lead to 18-11.

The teams traded two-point field goals over the next three minutes, but Spatenka’s 3 pulled the Huskies within 23-18 at the break.

The buzzer-beater was Owatonna’s first made 3 of the night after many attempts and cued a 45-22 run to end the game.

While the Huskies answered the Tigers’ 12-0 run with an 8-5 run of its own, Gorman didn’t think Owatonna had stolen momentum heading into break.

“Our focus at halftime was still very good,” Gorman said. “In the second half they came out with some pressure that kind of rattled us a little bit — not necessarily in turnovers, but we tended to rush things a little bit, and they got some shots to fall that we didn’t.”

Owatonna scored the first nine points of the second half, while going 5 of 5 from the foul line, but layups by Zuniga and Nya Chan, and a free throw from Tiffany Johnson, had the Tigers within 31-28 with 13:21 remaining.

Albert Lea trailed by only five points after Johnson got a steal and layup with 6:30 left, but Owatonna made 15 of 20 free throws over the final six minutes, including 10 of 10 by senior Sarah McCann, to hold the Tigers at bay. 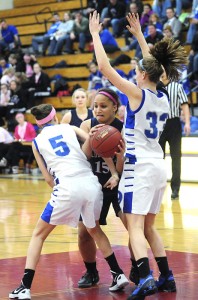 Albert Lea's Dominique Villarreal holds on the ball against two Huskies defenders on Tuesday during the second half of a 65-40 loss. -- Brandi Hagen

settle for jump shots and needed to attack the basket “by cutting harder off a screen or being stronger on a drive, drawing contact and getting to the free throw line.”

“Obviously when you get there you need to knock them down,” he said. “That’s helpful, too, because it let us set up in our defense and keep the pressure on Albert Lea.”

Both coaches praised the Tigers’ defense in the first half that held the Huskies — the second-highest scoring team in the Big Nine — to just 15 points for 17 minutes and 59 seconds.

“We didn’t come out an make shots but you can attribute that to Albert Lea,” Evje. “I thought they played with a lot of intensity. They played with grit in the first half and forced us into some quick shots that weren’t falling.”

Click here to view a photo galley of the Coaches vs. Cancer event