From parts to pavement 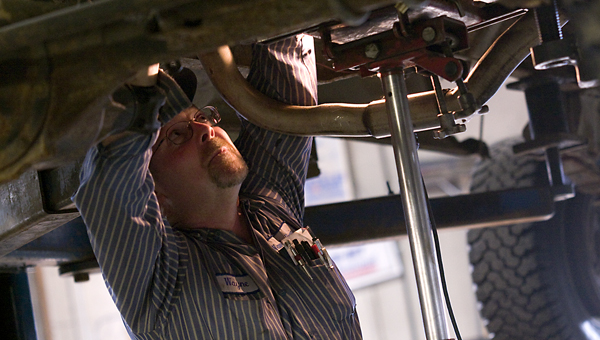 Wayne Nelson installs a transmission into a truck on Tuesday. Nelson has been in business for 22 years. -- Brandi Hagen/Albert Lea Tribune

FREEBORN — Destined to be a mechanic, Wayne Nelson has been in business for 22 years in this small town.

Nelson started Wayne’s Repair at his home just east of Freeborn. Over several years, the business grew by word of mouth. Nelson moved the business in 1999 to a more spacious building north of Freeborn Lake.

Nelson’s mechanic personality started when he was a young child living in the country. He spent his days tinkering with bicycles.

“I would fix tires, take the bikes apart and put them back together,” Nelson said. “Trying to be important, you know.”

Nelson’s older brother Larry was the one who got him interested in motorized vehicles. When Nelson was in fifth grade, Larry gave him the task of taking the motor out of an old ’55 Chevy.

Nelson said he did so with no problems.

Working on cars went hand-in-hand with racing for the Nelson brothers. Larry liked to race and Nelson enjoyed working on the cars. One night when Nelson was a bit older, but still not old enough to drive, he was feeling like a big shot and drove Larry’s racecar. In high school, while everyone else was going to prom, Nelson instead spent his time in the shop.

Their makeshift shop was in a barn at their parents’ house. It had to be relocated to a shed after Larry and Nelson burnt the barn down one night.

“Larry was welding and I was messing around with gas,” Nelson said. “One thing just led to another.”

Naturally, when it was time to get a job and a position opened up at Hinkley Chevrolet in Wells, Nelson jumped on board and became a mechanic.

After seven years and lots of encouragement, Nelson quit Hinkley and officially started up Wayne’s Repair.

Being a business owner, Nelson has had to face the challenges of keeping up with electronic parts of vehicles, working long shifts and knowing how to approach a problem.

“When others throw their hands in the air, I’ve got to come up with a solution,” Nelson said. “Guess you kind of got to be a coach.”

Since starting up his business, Nelson has grown to have four full-time people and two part-time people working for him.

They have helped him to become a well-rounded shop as each person has brought different talents to the team, most of them with more than 30 years of experience.

Last year alone, the men at Wayne’s Repair completed almost 4,000 jobs dealing with vehicles in some way or another.

Over the years, Nelson has given up on racing. Gaining interest through Larry though, Nelson’s 20-year-old son has started into racing and Nelson spends a lot of time with him getting ready for races at Deer Creek and Lansing.

“He was kind of brainwashed into that from day one,” Nelson joked.