The funeral service for Georgia A. Godtland, 61, of Albert Lea will be held at 2:30 p.m. Tuesday at Zion Lutheran Church in Albert Lea. The Rev. Joel Vano will officiate. Interment will be in Hillcrest Cemetery. Visitation will be from 4 to 8 p.m. today at Bonnerup Funeral Service, Albert Lea and one hour before the service at the church. 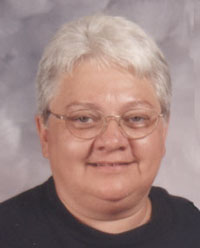 Surrounded by the love of her family, Georgia died on Saturday, Jan. 28, 2012, at Mayo Clinic Health System in Albert Lea after a four year battle with cancer.

She was born on Aug. 4, 1950, in Albert Lea, the daughter of E.R. Bud and Laura (Modderman) Runden. Georgia was baptized and confirmed at First Lutheran Church in Albert Lea. She graduated from Albert Lea High School in May of 1968, and on Aug. 10, 1968 she was united in marriage to David A. Godtland. Georgia loved kids and enjoyed being home when her children were younger. Once Janelle, Kevin and Jill were all in school, she began working as a Sibley Elementary “lunch lady” and also enjoyed being a bus monitor. She was a faithful member of Zion Lutheran Church, and had also been a member of the V.F.W. Auxiliary and T.O.P.S. Club. She enjoyed bowling, playing bunco and the many trips up north to the cabin. She was a passionate Minnesota Twins fan, but her real joy came from spending time with family, especially her grandchildren.

She was preceded in death by her husband David; parents, E.R. Bud and Laura Runden; her father-in-law and mother-in-law, Glenn and Eleanor Godtland; brother-in-law, Moses Abrego; niece, Kelly Abrego; and great-niece, Chelsie Huchko.