Georgia on her mind 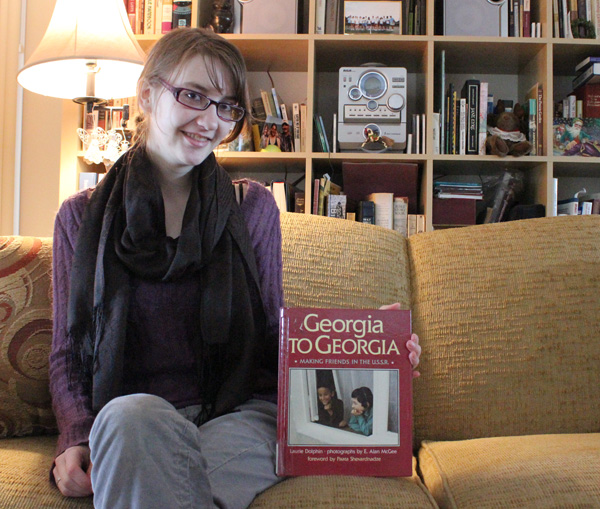 Amy Sandagar smiles for a photo with an old book someone found after they heard about her overseas trip. The book chronicles a child’s journey from Georgia, the state in the U.S., and Georgia, the country near Russia. Sandagar just arrived in Georgia Sunday morning where she will teach English for a year. -- Kelli Lageson/Albert Lea Tribune

A young woman from Albert Lea has taken advantage of a special opportunity to help teach the English language to people in Georgia — the small country south of Russia — not the U.S. state south of Tennessee.

Amy Sandagar, 21, was reading an article in the New York Times about a new program in Georgia called Teach and Learn with Georgia, and it sounded liked a challenge she’d like to try. The program is one that the country has initiated to make children in public schools across its country proficient in English.

“They want every person and student to have English as a second language,” Sandagar said.

Sandagar, the daughter of Chuck and Denise, of Albert Lea, recently graduated from Luther College. She applied to Footprints Recruiting and filled out paperwork before she was approved. She just landed in Georgia’s capital, Tbilisi, on Sunday.

She will have a week of orientation before being assigned to a school in the country. She said it was a little hard to pack not knowing which part of the country she’d be living in, because there are some warmer areas by the Black Sea and colder areas in the Caucasus Mountains.

She’s been learning what she can about the country, but knows a little about it because it borders Russia. She has visited Russia before, and her minor in college was Russian studies. She hopes her fluency in Russian helps her to communicate with some of the Georgian population, mostly the older population.

Georgian is the official language, but some speak Russian, Armenian and other languages. The country borders Russia, Turkey, Armenia and Azerbaijan. She thinks she’ll miss speaking fluent English, because she’ll be staying with a host family who will likely not speak it fluently. The teachers in the schools have been learning English, and Sandagar is excited to teach with them.

One of the challenges Sandagar foresees will be that the Georgian alphabet is so different from the Latin one used for English and other Western languages. One big difference is that Georgian doesn’t have the “th” sound.

Mostly she’s excited for the trip. She will have weekends and the summer off from teaching as there’s no school then. She hopes to visit areas around Georgia and take a trip to somewhere in Europe during her almost one-year stay. Because she’s already been to Russia, she’d like to see Spain or some countries in eastern Europe, like Estonia and Ukraine.

“I have one free round trip flight they gave me to use,” Sandagar said.

She said she felt comfortable with the one-year stay away from home because her family has hosted exchange students before, and her family has been supportive of the opportunity. Sandagar will return in December unless she decides to extend her contract. She’ll be blogging about her experience at www.backintheformerussr.wordpress.com.