Funeral services for Gerald Carl Schilling, 89, of Albert Lea, will be held at 11 a.m. Thursday at First Lutheran Church. The Rev. John Holt will officiate. Interment will be at Pilgrim’s Rest Cemetery. Visitation will be from 5 to 7 p.m. Wednesday at Bayview/Freeborn Funeral Home and one hour prior to the service at the church. To sign the guest book, go to www.bayviewfuneral.com. 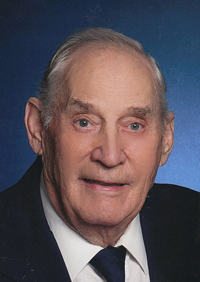 Gerald Carl Schilling was born on June 19, 1922, in Myrtle, to Alex and Laura (Theiss) Schilling. Gerald grew up on the family farm near Myrtle, went to elementary school in Myrtle and graduated from Albert Lea High School in 1941. He was active in FFA during school and won many livestock judging awards on the East Coast. On Nov. 26, 1947, Gerald was united in marriage to Delores Tews at Bethlehem Lutheran Church. The couple made their home in rural Myrtle where Gerald farmed and also was employed at Wilsons and Farmstead and at the ASCS Agricultural Office. In his younger days, Gerald enjoyed playing softball and was proud to be a member of the Freeborn County Softball Hall of Fame. Gerald was a member of Bethlehem Lutheran Church and was active in the male chorus in Bethlehem’s Lutheran Choir. After retiring the couple moved to Albert Lea and joined First Lutheran Church. Gerald enjoyed fishing, especially with his son, Alan, hunting, playing cards and watching sports, especially the Twins and Vikings. He was always willing to lend a helping hand whereever needed. Gerald treasured the time spent with his family and friends. He will be deeply missed by all.

Gerald was preceded in death by his parents; granddaughters, Heather and Denise Olson; brothers, Roy, Donald, Alexander and Kenneth.