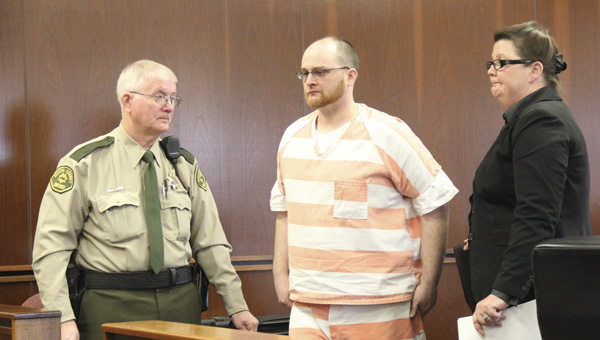 Aaron Gunderson returns to the custody of a Worth County sheriff's deputy Friday after a judge sentenced him to 15 years in prison. -- Tim Engstrom/Albert Lea Tribune

NORTHWOOD, Iowa — The man charged with the fatal hit-and-run of a young girl boarding a school bus last May has been sentenced to 15 years in prison and ordered to pay $150,000 in restitution, $100,000 of which has already been paid.

Aaron Dwayne Gunderson, 32, of Northwood will be eligible for parole in seven years. He pleaded guilty Jan. 6 in Worth County District Court to a felony count of vehicular homicide involving reckless driving and a felony count of leaving the scene of a crash resulting in the death of 7-year-old Kadyn Jade Halverson, of rural Kensett. 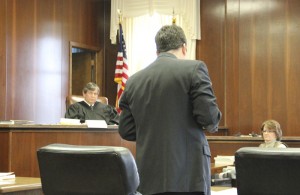 Calling him “an accident waiting for a place to happen,” Judge Bryan McKinley sentenced Gunderson to 10 years for the first felony and five for the second. The judge commended both sides for taking appropriate actions and said in 20 years on the bench he has never been so impressed with the behavior in such a tough situation.

“How you have conducted yourself has been exemplary,” he said. “It makes me proud to be an Iowan.”

Kadyn’s mother, Kari Halverson, sat at the witness stand and read a letter while wiping away tears. She said she will never get to see or hear Kadyn again.

“Because of Aaron’s choices, my daughter is dead,” the mother said.

She said Gunderson — who suffers from an optical impairment and who tested positive for marijuana use in the hours after his arrest — thinks only of himself. She noted how Gunderson told a friend he thought he might have hit a deer. 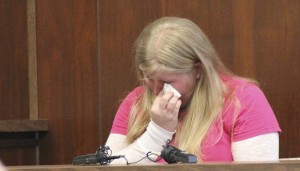 Kari Halverson wipes away tears Friday during testimony she gave at the sentencing of Aaron Gunderson, who killed her daughter on a highway near Kensett, Iowa. -- Tim Engstrom/Albert Lea Tribune

“A 14-year-old boy got to Kadyn first and carried her lifeless body out of a water-filled ditch,” Halverson said.

She asked for the maximum penalty — the 15 years — allowed under the terms of an agreement struck by the lawyers and families that led to the Jan. 6 guilty plea.

Gunderson was arrested May 10, 2011, by Worth County Sheriff’s Office deputies after striking and killing 7-year-old Kadyn Jade Halverson on Worth County Road S52 as she walked to a stopped school bus in rural Worth County.

Gunderson failed to stop for the flashing lights and extended stop sign of the school bus and struck Kadyn while driving 60 mph before continuing southbound, without stopping at the scene of the crash.

Kadyn was thrown more than 60 feet into the west ditch of the road and died at the scene of the crash. 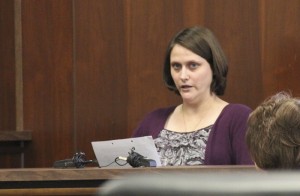 Danielle Gunderson testifies Friday at the Worth County Courthouse on why her two daughters and a son need their father. -- Tim Engstrom/Albert Lea Tribune

The investigation found he had more than 3,000 feet to notice the bus and witnesses said he reportedly stopped for a moment, then fled.

He was headed to a place 1 1/2 miles south and west of the scene.

Gunderson’s wife, Danielle, also testified. She said Gunderson is a good father of three children who had an accident. She said he is remorseful for what he did and has taken responsibility.

“He has nightmares all the time, and he never stops thinking about it,” she said.

The mother said she has three 3-year-olds who don’t understand why the father must go away. She said a longer sentence won’t bring Kadyn back but will harm her children. 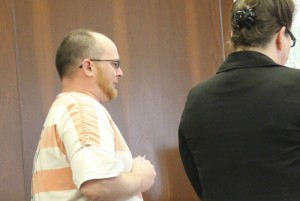 Aaron Gunderson weeps Friday at the Worth County Courthouse in Northwood, Iowa, while apologizing to the family of the girl he killed when he unlawfully passed a stopped school bus on a rural blacktop last May. -- Tim Engstrom/Albert Lea Tribune

“I don’t know how I am going to raise three children on my own,” she said, adding “both families lose in this.”

Gunderson, standing next to public defender Letitia Turner, began slowly, noting he had been advised by his lawyer to not speak about his remorse. Fighting tears, he described how he has put himself in the shoes of Kadyn’s family by imagining if it happened to one of his two daughters, but as he began to apologize, his weeping became sobbing.

“I am so deeply sorry to Kadyn’s family,” he said.

He asked for forgiveness and said he wishes he could bring the girl back.

Prosecutor Scott Brown, an assistant Iowa attorney general, read a letter from Kadyn’s father, Matt Kellogg. He described the death of Kadyn as “an accident caused by recklessness, selfishness and ignorance.”

“My whole life and the future I had planned with my daughter changed in an instant,” he said.

Wearing a Worth County Jail inmate suit, Aaron Gunderson walks into the courtroom on the second floor of the Worth County Courthouse Friday morning, with public defender Letitia Turner before him and his wife, Danielle, behind him. -- Tim Engstrom/Albert Lea Tribune

Kellogg said he had to quit his job because he couldn’t focus but has since found new employment. He said he is no longer angry but struggles with mixed feelings.

“No amount of time behind bars will fill the void,” Kellogg wrote.

She said she will never again hear the excitement of her three granddaughters when they would hear that Kadyn had arrived at her house.

“The four of them were like sisters, and now their lives are changed forever,” the grandmother wrote.

She said she hopes Jesus Christ someday will provide a new beginning for her relationship with Kadyn.

Grandmother Ladeena Halverson spoke at the witness stand and said she will miss Kadyn’s toothless grin, her giant hugs, gleeful screams on a roller coaster, the way she would roll her eyes and say, “Grandma!” and show her little brother, Kyler Meyer, now 5, how to do things.

“She didn’t get to walk Kyler to his first day of school as they had planned,” Ladeena Halverson said.

The Arizona resident recounted how she learned of the tragedy over the phone and mentioned how an aunt to Kadyn who lives in Arizona never got to know the child.

“Have you ever seen the size of a child’s casket?” she asked. “They are so incredibly small.”

Brown said Gunderson received “a substantial concession from the state” with a plea agreement that, by dropping another charge, removed 10 years from his sentence. He noted that with parole he could be back with his family in seven years.

He said the sentence agreed to in the plea bargain is “deserved and warranted.”

“He will eventually go back to his family. Kadyn’s family will never get her back,” Brown said.

Judge McKinley commended the Halverson and Kellogg families for showing mercy and “not looking for a pound of flesh.” He called the case “gut-wrenching.”

The judge said he understands the death was accidental but then noted Gunderson’s optical impairment, marijuana use and speeding.

By entering a plea of guilty Gunderson alleviated additional stress and pain from the ordeal of a trial, McKinley said. He called it “a voluntary and intelligent decision on your part.”

McKinley said the extended Gunderson family will have to rely on each other to raise the children while the father is away.

He also ordered Gunderson to pay $889.50 to a fund that benefits crime victims. Gunderson’s public defender asked that he not have to pay the state for legal fees. That ruling will be made in the judge’s written order.

The Worth County Sheriff’s Office on Friday transported Gunderson to Oakdale near Iowa City, where inmates enter the Iowa prison system.