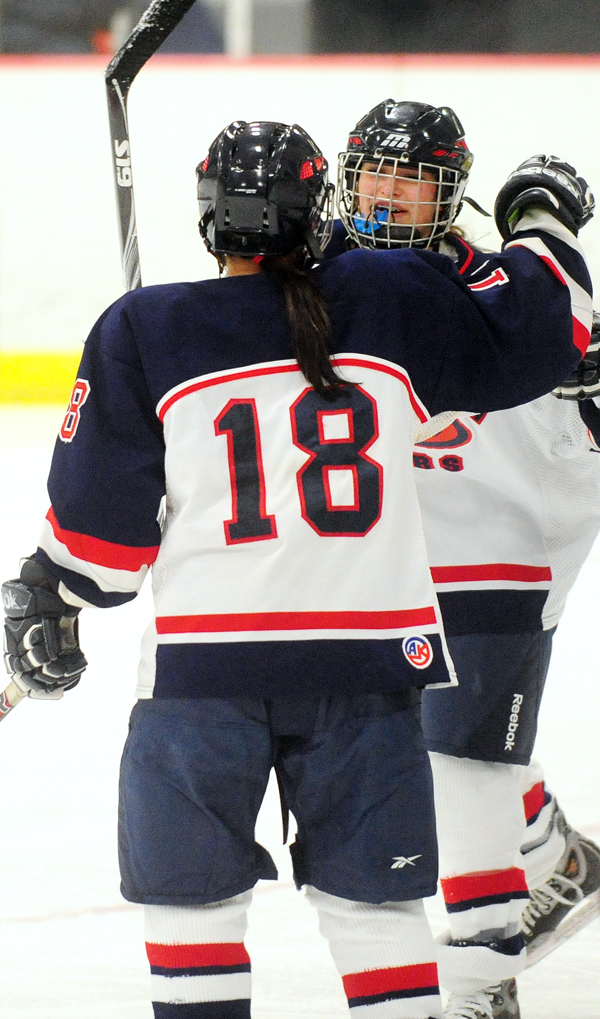 On the brink of skating out of a season-long slump, the Albert Lea girls’ hockey team looked to its two veterans on Thursday in hopes of winning its third game in four tries.

Senior Natasha Moyer and sophomore Anna Anderson each recorded a hat trick, and Anderson scored the game-winning goal 13 seconds into overtime to lift the Tigers (4-15) to a 6-5 win over Rochester Century at Roy Nystrom Arena.

The win was the Tigers’ third in four games after losing 14 of its first 15 to start the season, which included a 5-3 loss at Century on Dec. 1.

“I said early in the year that after Christmas I really felt we’d be a different team, we’d playing our best hockey and we have been” Tigers coach Paul Willett said. “We slipped up a little bit in Winona on Tuesday night, didn’t have a great game and it’s nice that we were able to bounce back off of that against a tough team and gut out a nice win.”

Tied 5-5 after regulation, the Tigers won the overtime faceoff and Moyer quickly passed the puck to Anderson, who was coming off two third-period goals. The speedy sophomore skated right down the middle of the rink toward the Panthers’ goal, deked two defenders and shot the puck over the goalie’s left shoulder. The Tigers’ bench cleared as the team celebrated together its third win of the new year.

Anderson said once she received the puck after the opening faceoff, all she saw was the back of the net.

“I knew I just had to get around those two defenders and I had it,” said Anderson, who had five points on the night. “We’re starting to realize what we can do when we play well and play to our full potential.”

The Tigers got off to a hot start against the Panthers (9-8) and led 2-0 just over five minutes into the game.

Anderson scored the game’s opening goal at 2:28 from in front of the goal off assists from Moyer and ninth-grader Haley Larson. Moyer then scored 2 1/2 minutes later on a rebound off an Anderson shot. The Tigers outshot the Panthers 8-7 in the first period and led 2-0 at intermission.

After a back-and-forth and mostly uneventful opening period, the game’s momentum began to swing like a pendulum in the second.

Moyer gave the Tigers a three-goal lead at 3:23 off assists from Anderson and Hannah Savelkoul before Century’s star eighth-grader, Jessica Aney, began to take over.

Aney, who was named the 2010 Sports Illustrated SportsKid of the Year, scored her first of four goals 5:15 in the second and another less than three minutes later to pull the Panthers within a score at 3-2.

“She’s a nice player,” Willet said. “She’s a fantastic athlete. She’s going to be very, very, very good as she gets older. She has fantastic hands, takes good shots and sees the ice well.”

The only other player besides Moyer, Anderson or Jessica Aney to score in the game, Century’s Katherine Aney, tied the game at 3-3 just 1:01 into the third period on a powerplay.

After outshooting the Tigers 16-4 in the second and scoring the first goal of the third, the Panthers looked well on its way to a come-from-behind win. But Moyer scored her hat-trick goal and Anderson her second over the ensuing 1:46 as momentum swung back in the Tigers’ favor with 5-3 lead.

“It was interesting,” Willett said of the game’s strange flow. “The momentum was shifting back and forth, and I’m proud of my kids for coming out after tough second period and basically dominating the third.”

The Tigers outshot Century 15-9 in the third, but Jessica Aney didn’t let Albert Lea off easy. The slick-skating eighth-grader scored two more goals — at 5:30 and 13:33 — to force overtime.

As quickly as Aney brought the Panthers back into the game, though, Anderson shut them down.

3 the amount of the wins the Tigers have since Jan. 1. The team had one win prior since Nov. 17

10 goals were scored by a combined three players

13 the age of Century’s Jessica Aney, who scored four goals on Thursday and was named Sports Illustrated’s SportsKid of the Year in 2010