Helene Katherine (Heath) Hustuft, 99, formerly of Wells, died Friday, Dec. 9, 2011, at North Ridge Care Center in New Hope. Memorial services will be held at noon Saturday at Good Shepherd Lutheran Church in Wells. Visitation will be one hour prior to the service at the church. The Rev. Kathy Fullarton will officiate and burial will take place in Rosehill Cemetery in Wells. Bruss-Heitner Funeral Home in Wells is assisting the family with arrangements. 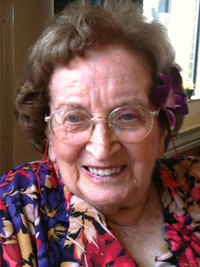 Helen was born in St. Paul on Jan. 19, 1912. She graduated from St. Paul, Johnson High School and attended Luther College. She graduated from the University of Minnesota with a double major in math and physical education. She was hired by the Wells School Board in 1933. She married Sidney Heath in 1939. They owned and operated the Park Hotel and State Theater and later managed the Flame Theater.

She was active in the PTA State Board, chairwoman of Cancer Drive and Worthy Matron of the Eastern Star. Helen was very active in the county and state Republican Party. She was the leader of two camp fire groups, Sunday school teacher and Church treasurer at the Good Shepherd Lutheran Church. After her husband Sid died in 1979, she kept very busy tutoring and was instrumental in starting up the public library in Wells. She was the Senior Citizen Queen of Faribault County; Helen was the grand marshal of the Kernel’s Day parade. Helen organized and lead a senior exercise group and worked and wrote a nutritional column for the Wells Mirror.

At age 77 Helen married Martin Hustuft. They drove veterans and seniors to Minneapolis and Rochester and delivered Meals on Wheels. Helen still found time to do some tutoring for children with medical needs. She was always doing something for the community.

Martin died when Helen was 85 years old. The next year she moved into Shepherds Inn in Wells and lived there for two years until she broke her hip and leg. She then moved to New Hope and the Masonic Home where she received great care and love.

Memorials given toward the family will be used to provide tutoring services.