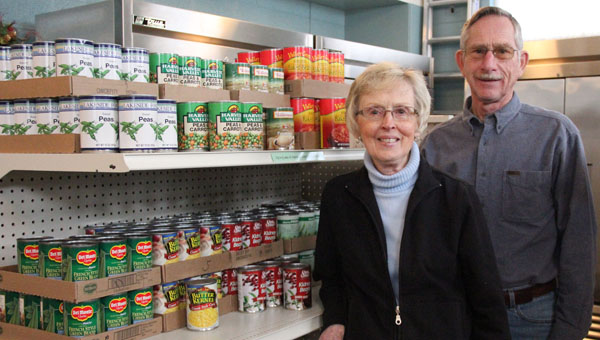 Orville and Dorothy Simonsen pose for a photo Friday at the Ecumenical Food Pantry, which is housed at First Presbyterian Church in Albert Lea. -- Kelli Lageson/Albert Lea Tribune

Having to choose between bills and food is increasingly becoming a problem in Minnesota seniors age 60 and older.

As the first baby boomers turn 65 this year, the number of seniors in Minnesota will rise as well as the hunger among them.

In Freeborn County, there are three food pantries that are working to help the hungry. Two are in Albert Lea — the Salvation Army and the Ecumenical Food Pantry housed at First Presbyterian Church — and one is in Alden at Redeemer Lutheran Church. 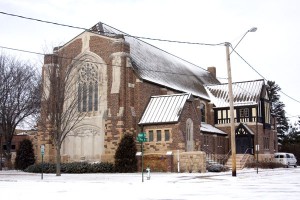 Between the Salvation Army and the Ecumenical Food Pantry, help is available five days a week in Albert Lea.

Also, in the warmer months, the Albert Lea Farmers Market is open on Wednesdays and Saturdays and has started accepting credit, debit and EBT cards.

Ellie Lucas, chief campaign officer for Hunger-Free Minnesota, encouraged seniors to enroll in the support system if they can’t afford the food one needs to stay healthy.

“Seniors who are hungry can be out of sight and out of mind,” Lucas said.

Orville and Dorothy Simonsen, volunteers on the board of directors at the Ecumenical Food Pantry, said that in December there were only 15 people over the age of 65 who came in and received help.

Seniors under 65 were included in the age group of 18-64. In this group, the Ecumenical Food Pantry helped 353 people.

The Simonsens believe part of the reason seniors may not be coming in is because they have no way of getting to the food shelf or to one of the three full-service grocery stores in Freeborn County, which are all in Albert Lea.

The Simonsens also speculate seniors may not take advantage of the food shelf because of their pride.

“The seniors now grew up through the Depression, and they aren’t used to taking from someone,” Orville said.

They have no reason to be ashamed or embarrassed though. Eighty-eight percent of hungry seniors are U.S. citizens who have paid into the system all of their working lives and now the system is there to help.

There are currently 88,000 seniors living in Minnesota below the poverty line and less than half of them are accessing the Minnesota food support system.

Freeborn County is no exception. Seventeen percent of residents often miss meals because of financial constraints.

Dr. Stacey Stockdill, president of EnSearch Inc., said in 2010, the average grant for seniors was $76 a month, a meaningful extension to a senior’s food budget.

In 2011, a single person household was eligible if they had a monthly income below $1,498.

“It’s important that seniors and community members are aware that this support is available,” Stockdill said. “Enrolled seniors can shop at their regular grocery store with an electronic benefit transfer (EBT) card that electronically transfers money to the store when they purchase their food.”

The cards look like credit cards so others in line at the grocery store don’t know the difference.

People needing assistance or who have questions, can contact the Minnesota Food Help Line at 1-888-711-1151.