Out with the old, in with the new. Happy New Year! 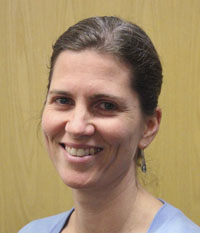 This past year had its share of sadness, with the loss of a dear mother and grandmother topping the list for my family. It also had its joys. But I am writing about a different sadness today. This December the Montessori Children’s House of Albert Lea closed up shop. This was a loss for our community, as well as a source of personal sadness for me.

In the fall of 1993, together with my mother, I opened the Montessori Children’s House to provide peaceful education for children in their preschool and kindergarten years. The school was based on the educational method started by Dr. Maria Montessori in 1907. Montessori was the first woman to graduate from medical school in Italy and went on to become a passionate advocate for children.

Montessori education is known for its strong academics, as well as the beautiful materials and child-friendly, interactive ways of exploring a wide diversity of subjects. Parents are struck by the small size of all the furniture in the room — not just the shelves, but the kitchen counter, sink and cupboards are real: functional, child-sized versions of our own kitchens. The children work in these kitchens, preparing food, washing dishes, doing everyday activities independently because all the tools and appliances are their size.

Tailoring the physical environment to the needs of the young child was only the tip of Montessori’s revolutionary iceberg. For Dr. Montessori called for much more radical changes in education; what she called “the spiritual transformation of the adult.” She wanted not just the objects, but the adults themselves to become more child-friendly.

Dr. Montessori was a scientist, but she was also a woman of strong faith. She wrote, “That which the educator must seek is to be able to see the child as Jesus saw him.” She believed that to enter the kingdom of heaven we actually do have to become like children and challenged us to know and understand children — who are something other than small adults!

Dr. Montessori was a pioneer in the field of psychology, which was just emerging as a new science in her lifetime. She argued that a child cannot develop a healthy mind and spirit in an upbringing where respect only goes in one direction, where any questioning of authority is seen to be an act of rebellion and the adult is always right just because she or he is the adult.

Dr. Montessori believed that world peace would only be possible when children had been raised and educated in an environment that did not insult their dignity. To this end, she urged adults — parents and teachers alike — to begin by looking inside themselves to see how their own pride and anger affect their relationships with children.

Anger we probably all understand, but what did she mean by pride? Dr. Montessori challenged educators to stop assuming that they always know what children need to learn, and how and when they need to learn it.

The fact that a teacher may not understand the importance of a child’s activity does not necessarily mean that that very activity is not important to the child’s learning. She recognized that movement, repetition and interest were critical to the learning processes of young children.

For children in middle childhood she observed their great need for social interaction with their peers, for imagination and for the development of abstract thinking. For adolescents, working (participating in and contributing to society) as well as learning about finances, examining (and challenging!) society’s mores and debating philosophical ideas were what captured their interest.

In this time of nationally determined curriculums and testing schedules, Montessori’s writings seem more relevant than ever. How do you think students would feel about school if they were able to choose some of what they are learning about? If the psychological characteristics of their stage of development were accommodated at school? If the teachers had the time to create teaching units that captured the student’s imagination and inspired them, rather than having to spend so much time administering and correcting tests and worksheets?

While Montessori education is known for its academic results, the focus of her work was on the development of a healthy “psychology” and strong character, for it was only with these results that Montessori could foresee a future in which mankind would become less violent. Montessori’s ideas were revolutionary not only because they were new, but because they spoke truth to power, and demanded some change from those in power.

My sadness at seeing the Montessori school in Albert Lea close is due in part to the fact that an alliance was never really made between the Montessori school and Albert Lea Area Schools. I think that would be an exciting partnership that could do great things for students in our area. Perhaps a seed has been planted, though, and at some time in the future a charter school or even Montessori classrooms in the elementary buildings will become an option.

Sophie Ehrhardt is a member of Freeborn County Paths to Peace.