John Bernhard Menke was born Jan. 6, 1918, in Scott, Saskatchewan, Canada, the son of John and Ann (Wessels) Menke. At a young age his family moved to the Bancroft area where he attended St. John’s Catholic School. After his schooling he lived in Albert Lea where he worked and traveled the area playing baseball. 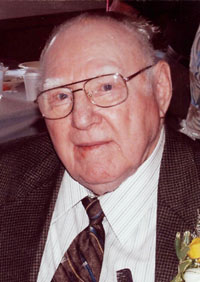 In February of 1942, John joined the United States Army. On Aug. 14, 1943, John was united in marriage to Harriet Johnsrud, while stationed in Dothem, Ala. Following his honorable discharge from the military in October of 1945, they returned to the Bancroft area. John began farming in April of 1946, and continued until his retirement in 1982, when they built a home and moved into Bancroft.

John enjoyed being with family at the many reunions and other events. He loved to play baseball and the game took the couple on many road trips and they enjoyed the traveling. John was also an avid golfer. He was a member of the Bancroft American Legion McKinnon Post No. 377 and the VFW.

He is survived by his wife, Harriet of Bancroft; sister, Janet Winkel Muller and her husband, Jim, of Whittemore; and numerous nieces, nephews, great-nieces and great-nephews.

Visitation will be from 4 to 8 p.m. Friday with a rosary at 4 p.m. and a parish vigil service at 7 p.m. at Oakcrest Funeral Services in Bancroft, Iowa. Funeral Mass will be celebrated at 10:30 a.m. Saturday at St. John’s Catholic Church in Bancroft with the Rev. John Thomas officiating. Burial will be in St. John’s Catholic Cemetery.

Condolences can be left at www.oakcrestfuneralservices.com.