Blossoms too much for Knights 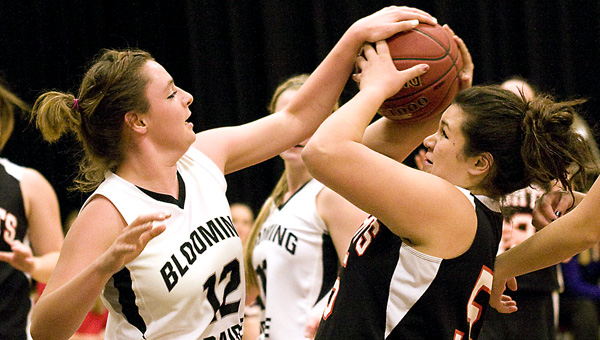 Alicia Schewe, right, fights for control of the ball after a shot on Monday. Alden-Conger lost to Blooming Prairie 61-31. Brandi Hagen/Albert Lea Tribune

With Liesel Theusch and Brooke Reyerson sitting out due to injury, the Knights had to change up their game plan.

“The complexion of our team and the depth of our team was pretty different than what we’ve done in the past,” Knights coach Jenny Hovendick said.

In the first five minutes of the game, Blooming Prairie had a 6-0 lead. 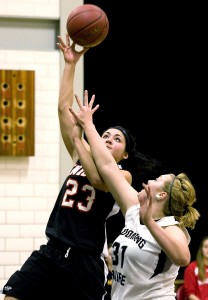 Taylor Martin scored four points for the Knights after a timeout called by Alden-Conger, but within 20 seconds, Blooming Prairie went on a 10-point run.

Over the next four minutes, the Knights scored 10 points to the Blossoms’ six but still were behind at the half 32-14.

“They cut to the basket hard, they passed the ball extremely well and found the open person,” Hovendick said. “When they got open layups they made them. It was simple as that.”

In the start of the second half, Alden-Conger only scored once while Blooming Prairie had yet another 10-point stretch.

The Knights were outscored by the Blossoms in the second 29-17.

“They have a really athletic team,” Hovendick said. “They get to the rim and they score really well. We just didn’t meet their intensity and challenge them defensively like we needed too.”

Hovendick said with back-to-back games, the Knights haven’t had much practice and will be taking advantage of their time before Thursday’s game at Martin Luther.

“We’ve got to try and get lots of shooting in, build some confidence back up and get ready to play again,” Hovendick said.