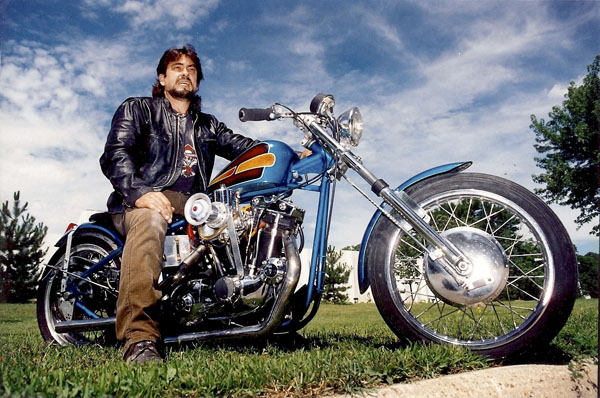 This photo of Thomas Gordon at age 45 was published in the Albert Lea Tribune on July 28, 1991. The article was titled “Harley Racer also Family Man.” Gordon died unexpectedly on Dec. 11, 2011 of a blood clot.

A young man with a military buzz cut and a muscular upper body build grew into an older, still quite muscular family man with long black hair, a black mustache and beard, sporting sunglasses and leather attire.

Thomas Gordon, or Ironhead Tom to those in the online community, had three passions in life: his family, motorcycles and weightlifting.

He passed away unexpectedly at Mayo Clinic Health System in Albert Lea from a blood clot on Dec. 11, 2011.

Gordon had been an Albert Lea resident since he was a child. He was born in Faribault on Sept. 27, 1946, to Burneth and Phyllis Gordon. He graduated from Albert Lea High School in 1964.

His latest motorcycle shop, Motorcycle Specialties, was located on the south side of town at 301 Mill St.

The feeling of freedom, speed and edge enticed Gordon into the motorcycle world. Before opening his own shop, the living room in his home seemed to be a suitable place to tinker with motorcycles.

What seemed like a foreign language to many became Gordon’s profession. He learned how to improve motorcycles, customize them and build his own.

“His vast knowledge in regards to motorcycles and their design was surprising to me all the way to the very end,” said Gordon’s only son, Jason.

Owning a couple of different shops, Gordon kept them the same way. Guys would come in to shoot the breeze in a space where shelves were packed full of Harley parts and the walls full of tools. A paint booth released a fruity aroma in the air from the candy paints and the workbench held his current projects.

In his thirties, the shop couldn’t contain Gordon any longer. He had a competitive personality and wanted to race.

Loaded into a big Econoline van with an oldies station playing on the radio, Gordon, his wife Cindy, who he’d spend more than 40 years with, and their three children, Melanie, Amy and Jason, would travel to different racetracks on Saturdays during the summer. His main track was in Humboldt, Iowa.

In 90-degree weather and dressed in his leather pants and a leather coat, Gordon would race down the asphalt on bikes he built himself.

In 2008, a motor he built set a land speed record in North Carolina. It was a thrill for him and his family knowing that after having a stroke in 2001, he could still outperform others.

During his career, he set three national records and racked up a room full of trophies.

Racing trophies weren’t the only ones he collected.

A member of the Family Y for 51 years, he could always be found in the basement working out in the weight room.

Standing 5 feet, 9 inches, Gordon drank protein shakes on a religious schedule. At his peak, he was able to bench more than twice his weight at 460 pounds.

For 40 years, he was an avid weightlifter and did so competitively for 10 to 15 of those, winning several trophies.

Because he had so much success and experience with weightlifting, Gordon became a mentor to a lot of other lifters at the Y.

“I remember him always having funny stories to tell or experiences to share,” Jason said. “He was always making people around him feel good. I think he carried that into weightlifting and motorcycles.”

After the stroke, Gordon had to work four days a week in the gym to improve his health. He never fully recovered, but was able to get back up to lifting 350 pounds. He was at the gym just two days before his passing.

Even with his passion for motorcycles and weightlifting, at the end of the day it was family time.

Gordon made time to be silly with his now grown children and made sure he took them to band practice, wrestling or whatever it was they were involved in.

“I think it was clear to everyone in his life that after my parents started a family, it would be the main focus for the rest of his life,” Jason said.

Up until his death, Gordon didn’t let anything get in the way of his three passions.

“He lived one day at a time,” said Jason.

The day or night sunglass wearing man dressed in black jeans and a Harley T-shirt will never be forgotten.