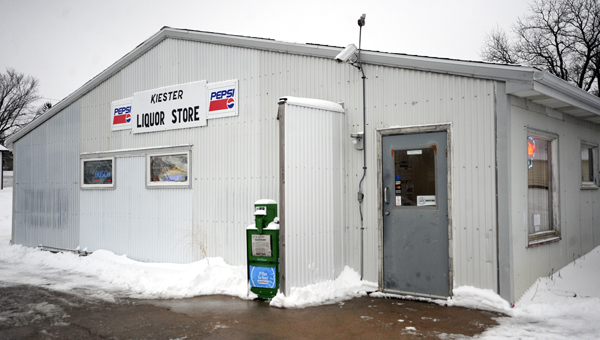 The Kiester municipal liquor store has been in business since the ’40s. Over the last few years, the city has used the profits to purchase a 1988 snowplow and a 1996 street sweeper. -- Brandi Hagen/Albert Lea Tribune

KIESTER — By using profits from its liquor store to make purchases, the city of Kiester helps to keep the tax levy down.

“That is especially good since Kiester is an aging community,” Kiester City Clerk and Treasurer Kari Jacobson said. “Many are on fixed incomes.”

In 2003, the first payment was made on a used 1988 snowplow and is now owned. The snowplow was a necessity because the one the city had been using was a 1968 model. The old plow needed repairs that would have cost nearly $8,000.

In December 2001, the position of city clerk and liquor store manager were merged into one.

Shortly afterward, Jacobson and maintenance supervisor for the city Marlin Alberts made the recommendation to the City Council to utilize the liquor store profits by putting them back into the city. The council members approved of the idea.

At that time, Jacobson accepted the extra task of managing and has since turned the finances of the liquor store around.

“It is my understanding, it was operational pretty much in the red until I took over,” Jacobson said.

“We had been inching up every year as far as the amount of sales that had been made until about last year,” Jacobson said.

In between expenses to keep the liquor store running, money is saved to buy necessities for the city.

Jacobson said next on the wish list is a lawn mower and a storm sewer vacuum trailer.

“As long as we have the equipment here that we need, we should be able to buy some equipment for the city with the profits of the liquor store,” Jacobson said.

Jacobson said she doubts most people know that the liquor store makes profits and what it does with them unless they read the minutes from City Council meetings.

“As the chief financial expert I am able to see the whole picture,” Jacobson said. “I think that’s the only way to be fiscally responsible. We have to live within our means, and if we can do something to utilize the profits to help the city, that’s what its intention was.”