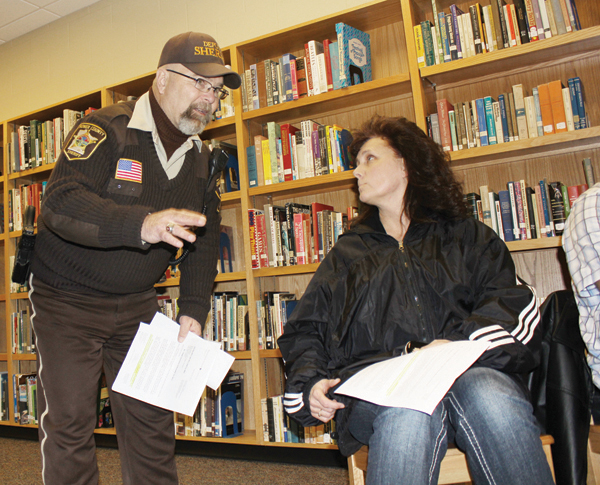 It wasn’t a meltdown like many predicted, but the Lyle school board meeting had some fireworks.

Board members were at odds once more, though board chairman Dean Rohne’s resignation and superintendent Jim Dusso’s decision to leave the district may smooth things in the future.

Rohne resigned from the board in a letter dated Dec. 26 to vice chairman Carl Truckenmiller, citing job opportunities which might take his children out of the district. Rohne was not present at Monday night’s meeting.

“As I look back on my six years serving as a board member, I believe the Lyle School is better than it was when I was elected,” Rohne wrote.

Rohne did comment on the controversy surrounding Lyle school in his letter, writing the one issue Lyle did have was a public relations one.

“I hope over time certain members of the community will again regain the trust of the board in making decisions for the best interest for the district,” he wrote.

Dusso met with several friends Thursday and the entire staff Friday. At Friday’s meeting, he told staff of his plans and that his wife had accepted a position at the University of Kentucky Medical Center.

Dusso’s wife will move to Kentucky before the school year ends and he will join her in July. He said he will serve the remainder of his superintendent contract, which expires June 30. 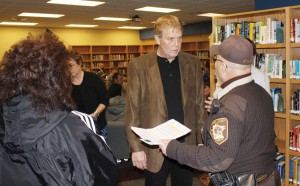 Newly sworn in Lyle School Board Chairman Jerry Sampson, center, tells Mower County Sheriff’s deputy Bob Kvam, right, that Wendy King — wife of board member Dan King — can stay in the meeting even though Superintendent Jim Dusso asked to have her removed.

Sampson to lead board

Incoming board member Jerry Sampson was appointed board chairman Monday night. Sampson, who previously served three terms on the board, will serve the remainder of former member Scott Nelson’s term, which is up for election this November.

“I’m up to the opportunity,” Sampson said.

The board also appointed Brandon Slowinski to fill Rohne’s seat, although Slowinski will have to wait until February to officially join the board.

Yet Dusso’s intention to leave the district in July means the board must find a new superintendent and principal. Board member Jessie Meyer told the board Grand Meadow and Glenville/Emmons Superintendent Jerry Reshetar would not resign this year, which hampers Lyle’s plans to find a new superintendent. The board’s plan when they hired Dusso to be superintendent was to rejoin the three-school consortium between the three schools by hiring a superintendent who would replace Reshetar, who resigned from Lyle in April of 2011. Reshetar had planned to resign after this year, and preside over all three districts. Reshetar resigned from Lyle in April of 2011.

The board directed Sampson to meet with Reshetar and Dusso to come up with a reasonable solution for the board’s administrative issues.

Board members decided to allot 25 minutes to public comment and allow up to five speakers to give their thoughts under a five-minute time limit. Delegates would sign up about 15 minutes before a board meeting began.

It is unclear how the board would deal with residents who called ahead to sign up or how more than five delegates would be accommodated, though board members did propose having residents who were speaking on the same issue decide among themselves who would speak.

The board must read and discuss the new policy twice before adopting it.

Board members boil over

The night wasn’t without its controversies, however. Board members argued on issues from filling Rohne’s vacant seat to the superintendent search and more, culminating in Mower County Sheriff’s deputies being called to remove board member Dan King’s wife Wendy.

The trouble started when several audience members clapped once the board made Rohne’s resignation official. Board member Carl Truckenmiller took offense to the comment, telling the crowd, “I hope that was a clap for his years of service and not that he’s leaving.”

Though Truckenmiller apologized, the audience shouted their opinions. One senior citizen said she hoped “the community can come together and have some trust in our board.”

Dusso left the meeting soon after, calling sheriff’s deputies to come to the meeting and remove Wendy King. The board sent a letter to Wendy in November banning her from attending future board meetings after she was asked to leave its November meeting. Wendy said last week that she intended to come to the January board meeting after challenging the district’s letter and speaking with Sheriff Terese Amazi.

It was clear deputies did not want to remove Wendy after she gave him a letter and told him she spoke with Amazi.

“I’m between a rock and a hard place,” the deputy who asked Wendy to leave said.

Dan, Wendy and several audience members asked why she needed to leave, with Dan at one saying the move was risking a lawsuit. Dan revealed the district had also sent him a letter forbidding him from going to the school and speaking with teachers. Dan also said he and his wife decided to pull their children from Lyle school last month after they spoke with Amazi over the pressure their children faced at school.

Sampson eventually spoke to the deputy, asking him to allow Wendy to stay and to stick around in case there was more trouble.

Board member King said after the meeting he and his family felt targeted by Dusso.

“(It was) pure vindictive behavior by our superintendent,” he said. “He would do anything in his power to harm us.”

Though the board and administration are going through a change in leadership, Dusso’s and Rohne’s resignations leave the district in a difficult position.

The board will meet in February to discuss its strategic planning, at which point they’ll also discuss how to go about hiring new administration.

Dusso said he will still be as vigilant about Lyle students’ education.

“It’s not over,” he said. “I’ve been very pleased with a lot of the things we’ve accomplished in this short time. I’ve always had positive things to say and that’s what I’m going to continue to do. It’s been a growing experience.”

Yet Dusso’s departure doesn’t mean residents who criticize his decisions are willing to let the issues surrounding his leadership be.

“Tonight … he was finally put in his place,” said Wendy King.

Dusso hopes residents on both sides of the issue are able to reconcile and the school can succeed in their previous efforts to bring the community together.

“My hope is that, somehow or another, people can get beyond that. As I said in my statement, relationships can be reestablished and respect can grow again,” he said.