Funeral services for Mabel B. Wadding, 101, of Albert Lea, will be held at 11 a.m. Thursday at Grace Lutheran Church. The Rev. Todd Walsh will officiate. Interment will be in Greenwood Cemetery in Glenville. Visitation will be one hour prior to the time of the service at the church. Online condolences are welcome at www.bayviewfuneral.com. 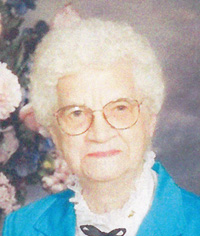 Mabel Bernice Wadding was born on June 28, 1910, in Moosejaw, Saskatchewan, Canada, to Frederick and Mary Kleven, U.S. citizens who were homesteading in Canada. She was delivered at home by a midwife. Weighing only 3 pounds, she was wrapped in a blanket and put in a shoe box next to the wood-burning stove for warmth. It was survival of the fittest and Mabel was strong and had a tenacious spirit even then. And so began her trek as a survivor moving through this life. In 1921, when Mable was 11 years old, her mother moved all seven children back to the U.S. to live with her grandmother Bertha Lee at her farm near Glenville. In 1929 at 19 years of age, Mabel married Lloyd Wadding. They farmed in the Glenville area for 20 years and had their first two children: Leland and Beverly.

The family moved to Albert Lea in 1949 and Lloyd began working at the Wilson Sinclair meat-packing plant. Mabel continued to care for her family at home and their third child, Debbie, was born. Lloyd passed away in 1963 at 54 years of age, leaving Mabel to raise Debbie alone. Mabel began working as a cleaning person for the next six years at people’s homes. She worked as a maid at the Hotel Albert for a couple of years and then in the kitchen of the Good Samaritan Home for 12 years, finally retiring in 1981 at age 71. Mabel remained active and lived independently for many years. She enjoyed playing cards, baking, cooking, sewing and helping her family and friends.

Mabel was the last surviving child of Fred and Mary Kleven; having outlived her six siblings. She was the third oldest of the seven children. She loved spending time with her three children, nine grandchildren, and numerous great-grandchildren. Mabel was preceded in death by her parents, her husband, Lloyd, and her son, Leland.

When asked how she managed through the difficult times in her life, she said she always relied on her faith in Jesus. That faith was the cornerstone of her life and the reason Mabel always helped others in any way she could. She gave of herself unselfishly throughout her life and was an outstanding role model for her family. Thank you, Mabel for being so strong, loving, and hardworking. You have set the standard for your family.