Marjorie Ann Mutschler, 83, of Kiester, died Wednesday, Jan. 4, 2012, at Parkview Care Center in Wells. A memorial service will be held at 10:30 a.m. Monday at Our Savior’s Lutheran Church in Kiester. Visitation will be from 2 to 5 p.m. Sunday at Bruss-Heitner Funeral Home in Wells, and will continue one hour prior to the service at the church on Monday. The Rev. Cherie Daniel will officiate and burial will take place in Fairview Cemetery, Kiester, Faribault County. Bruss-Heitner Funeral Home in Wells is assisting the family with arrangements. 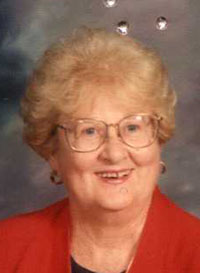 Marge was born May 10, 1928, in Minneapolis, the daughter of John and Grace (Ryan) Gaffey. She graduated from Alden High School in 1946, and from Naeve School of Nursing in 1949. She was a nurse for 64 years, serving in many capacities including patient care and teaching. On June 28, 1969, she was united in marriage to David W. Mutschler in Hollandale. She was still active in the Naeve Alumni and Nurses Club and enjoyed the chance to meet other members. After retiring from the Naeve Hospital, Marge kept active by staying involved with industrial nursing, blood drives and the Interfaith Caregivers. First and foremost, she was very involved in her children’s and grandchildren’s lives. She loved spending time with her many, many friends playing cards, bowling, golfing, traveling and going to the casino. She was a member of the Kiester American Legion Auxiliary and was an active member of the Grace United Methodist Church and United Methodist Women.