Funeral services for Mark Douglas Riskedahl, 50, of Glen Burne, Md., will be held at 11 a.m. Saturday at Oakland Lutheran Church. The Rev. Bob Berthold will officiate. Interment will be at Fairview Cemetery. Visitation will be from 5 to 7 p.m. Friday at Bayview/Freeborn Funeral Home and one hour prior to the service at the church. To sign the guest book, go to www.bayviewfuneral.com. 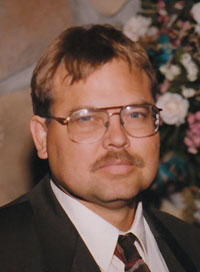 Mark died Wednesday, Jan. 25, 2012, at Season’s Hospice House in Rochester as a result of complications from a stroke and his long time battle with diabetes.

Mark Douglas Riskedahl was born on Nov. 3, 1961, to Doug and Audrey (Legried) Riskedahl in Albert Lea. He was baptized and confirmed in faith at Oakland Lutheran Church. While in school, Mark was active in church activities, 4-H, FFA, wrestling and football. Mark graduated from Austin High School in 1980. He attended Austin Vocational Technical Institute for machinist. In 1985 he relocated to the Baltimore area where he was a machinist at several locations. On Nov. 25, 1989, Mark married Paula Robin Elliott, they later divorced. Most recently, Mark was employed as a machinist at National Security Agency. Mark was a model train and railroad enthusiast, enjoyed bowling league, music and was an avid Viking Fan. Mark loved spending his time on the east coast, on boats, and on the bay and ocean with his many friends. Blessed be his memory.

Mark was preceded in death by grandparents: Ordean and Edna Riskedahl and Ben and Rhodie Legried; aunts and uncles: Clayton and Charlotte Legried and Kenneth and Norma Legried.