Memorial services for Mary Jane Margaret Cady, of Hayward, will be held at 10 a.m. Saturday at St. Theodore Catholic Church of Albert Lea. The Rev. Timothy T. Reker and Deacon Mike Ellis will officiate. Visitation will be held from 4 to 6 p.m. Friday at the Bonnerup Funeral Service and one hour prior to the service at the church. Interment will be in St. Theodore Catholic Cemetery. Mary Jane died Saturday, Jan. 14, 2012, at the Good Samaritan Center in Albert Lea. She was 78 years of age. 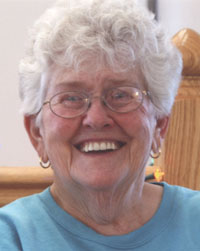 Mary Jane was born May 13, 1933, in Cogswell, N.D., the daughter of Jake and Mary (Flesch) Seelhammer. She graduated from high school in Cogswell, N.D., and the North Dakota State School of Science. On Nov. 15, 1952, she was united in marriage to John Cady in Cogswell, N.D. Mary Jane had lived in Cogswell, N.D., and Hayward from 1964 until 1992, Alexandria and moved to Albert Lea in 2010. She had been the postmaster in Hayward and Herman. Mary Jane was also the city clerk in Hayward. She was a member of St. Theodore Catholic Church and was active in CCW, funeral meals and as the chair for the annual antique show. In her free time she enjoyed being a Girl Scout and Cub Scout Leader, playing board games, sewing and puzzles. One of her greatest joys was time spent with her family, grandchildren and great grandchildren at various gatherings.

Mary Jane was preceded in death by her parents and brothers: Wayne and Ralph Seelhammer.

In lieu of flowers, memorials may be made to the Alzheimer’s Association.