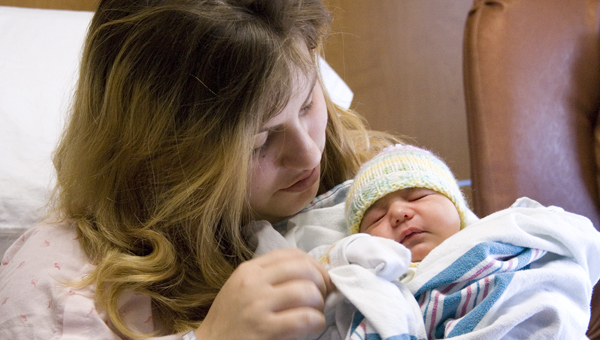 Second-time mom Jade Anfinson watches her newborn Clara Star Gaytan, who was born on New Year's Day. Clara was the first baby to be born in Albert Lea in 2012. -- Sarah Stultz/Albert Lea Tribune

It was a race to the finish to become Albert Lea’s Baby New Year for 2012.

In a matter of 4 1/2 hours on New Year’s Day, three babies were born at The Baby Place, the name for the maternity ward at Mayo Clinic Health System in Albert Lea. 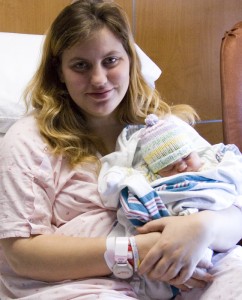 But it was Clara Star Gaytan, the daughter of parents Jade Anfinson and Javier Gaytan, of Wells, who made her debut into the world first.

Delivered by obstetrician Joseph Lombardi, little Clara was born at 7:36 a.m. and weighed 7 pounds, 5 ounces. She was 20 inches long and joins a brother, Javier, who is 10 months old.

The proud mother said she had started having contractions at about 11 a.m. Dec. 31, but at that point she thought it was just false labor, known as Braxton Hicks contractions.

But the contractions started getting so much stronger and more frequent that by midnight — just as the ball was beginning to drop to ring in a new year — she called for an ambulance.

Anfinson said the ambulance arrived to pick her up at 12:30 a.m. New Year’s Day. Crews took her to the hospital, and about seven hours later, Clara was born.

Anfinson said she was in labor longer with Clara than she was with her first child, Javier, who was born after only about three hours at the hospital.

“I thought it was going to go faster this time, but she held on,” the mother said.

She noted that Clara has been spending the majority of her time sleeping since she was born. 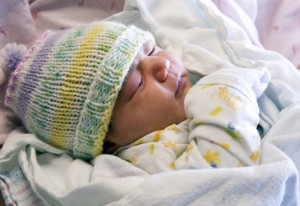 Albert Lea’s Baby New Year was born at 7:36 a.m. New Year’s Day at Mayo Clinic Health System in Albert Lea. Clara Star Gaytan was the first of three babies to be born within a 4 1/2 hour span that day.

The family left The Baby Place, which is on the third floor, on Tuesday to return to their home in Wells, where they have lived for two years.

With two children just 10 months apart, Anfinson said she and her boyfriend are anticipating a hectic life with two young children.

“We’re both nervous, but we think we can do it again,” she said.

The family received a bouquet of flowers with a balloon and a gift basket full of items for the new baby from The Baby Place. 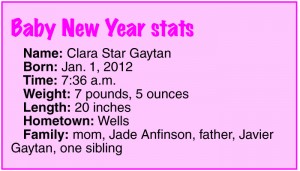