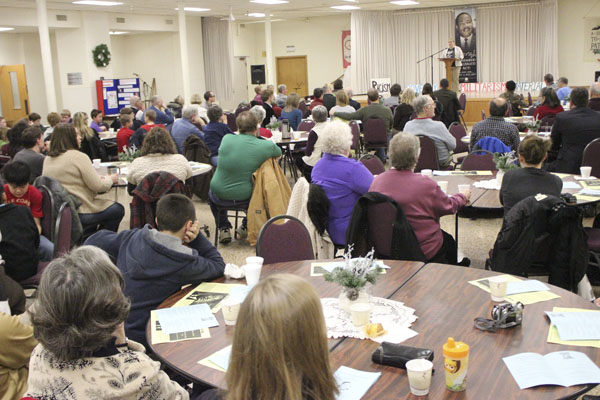 “It starts with me.”

That was the message that rang loud and clear this morning at the 24th annual Martin Luther King Jr. Breakfast held in Bethany Hall at First Lutheran Church.

As part of three songs presented by a group of Lakeview Elementary School fifth-graders, the students encouraged a crowd of about 100 people to be agents of change for freedom and human rights.

“Everyone should have their own rights, their own freedom,” said student Courtney Claassen.

Claassen said she and her classmates have been learning about Martin Luther King Jr. Day, which is observed traditionally the third Monday in January each year. They’ve learned about different times in the country’s history when people were not able to enjoy the rights they do today.

She and fellow fifth-grader Cassidy Daniel said they participated in the breakfast to see people smile with their messages. They also got people out of their chairs and dancing at one point in the presentation.

Organized to promote peace and nonviolence in the community, the breakfast this year revolved around the theme of “Beyond the Dream: the real lessons of Dr. King.”

“We hope to get people thinking,” said one organizer Dennis Dieser, director of the Albert Lea Family Y.

In addition to a breakfast and the Lakeview Elementary School presentation, people in attendance also enjoyed the annual Paths to Peace Scholarship presentation to student Annabella Randall and reflections on some of King’s messages, including on topics of racism, militarism, poverty and materialism.

The event closed with the musical selection “Finladia” by Cassi Schreiber and “Let There Be Peace on Earth” sung by all those in attendance.

Third Ward Albert Lea Councilor Ellen Kehr encouraged those in attendance to reflect on the United States and what it stands for.

“We have come a long way since the Civil Rights Movement of the 1960s, but we still have a way to go,” Kehr said.

Organizer Linda Lares said she hoped the breakfast would be a good start to a new year in Albert Lea, continuing King’s work in the community.

“It’s been a great collaborative,” Dieser said. “The attendance has always been very good.”

A $3 suggested donation per person was being taken at the door. Nonperishable food items were also being collected to benefit a local food bank.

“Martin Luther King holiday is a day on, not a day off,” Dieser said. “A day to focus on the good.”