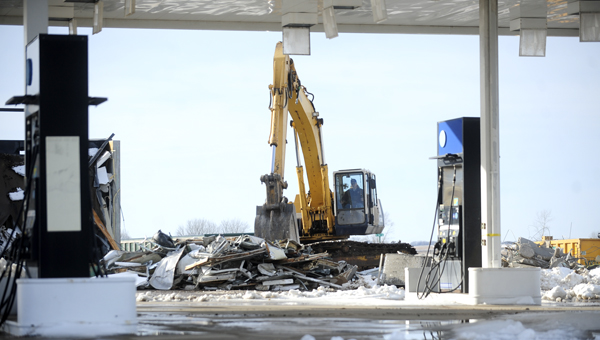 Demolition begins at the former Mobil Station on Monday. Kwik Trip intends to turn it into one of its modern stations by mid-fall. -- Brandi Hagen/Albert Lea Tribune

A gas station that has been shuttered for seven years is to become Albert Lea’s third Kwik Trip convenience store. Demolition on the former Mobil gas station on Bridge Avenue began Monday.

The new building will be about 6,000 square feet and will include “green” design, resembling new Kwik Trip stores built in the Twin Cities, according to Hans Zeitlow, director of real estate at Kwik Trip Inc. 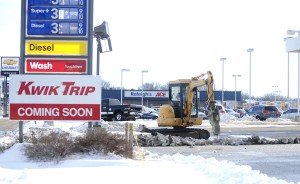 A backhoe with a jackhammer attachment busts concrete Monday at the future site of Kwik Trip. The four gas tanks that Mobil used are outdated and will be replaced.

The store will be made of brick with skylights, LED lights and a concrete parking lot, instead of asphalt like some stores. There will be a separate island for diesel, so that entering and exiting is easier for large trucks.

With the expenses of a new building, equipment and building and land improvements, the renovation is expected to cost several million dollars.

“It will be a much nicer facility than the existing convenience stores in Albert Lea,” Zeitlow said.

Twenty-four new jobs — 12 full time and 12 part time — are slated to be created.

The plan is to have the building completely demolished by tonight, and Zeitlow said the gas tanks are slated to be taken out on Friday or early next week, if all goes as arranged.

He said the plan is for construction to begin in July on a store, with it to be open for business in mid-fall.

When the three-acre property was first purchased for $1.5 million in October, he had been unsure if the Mobil store would be renovated or bulldozed. Zeitlow said the decision was made to start fresh.

He said the old building was inferior and small and the station had old tanks and an old gas canopy.

“It was probably 20 years old, so rather than reusing it, it was a better investment for us to have a new building and new equipment,” Zeitlow said.

He noted the company typically holds a job fair to hire new employees or people can go to www.kwiktrip.com to find an application.

Kwik Trip builds about 20 new stores each year. According to the company’s website, Kwik Trip Inc. opened the doors to its first store in 1965. Now, there are more than 350 stores under the company’s ownership — including Kwik Trip, Kwik Star, Hearty Platter and Tobacco Outlet Plus stores — throughout Wisconsin, Minnesota and Iowa.

The company also has its own bakery, commissary, dairy, distribution warehouse and vehicle maintenance divisions.

The former owner of 2611 Bridge Ave. was Midwest Oil of Minnesota, which also goes by the name Yehud-Monosson USA Inc., according to files in U.S. Bankruptcy Appeals Court for the Eighth Circuit.

Yehud-Monosson is a subsidiary of the Shawano, Wis., religious group called the Dr. R.C. Samanta Roy Institute of Science and Technology Inc., or SIST.