More info on the Wisconsin Special 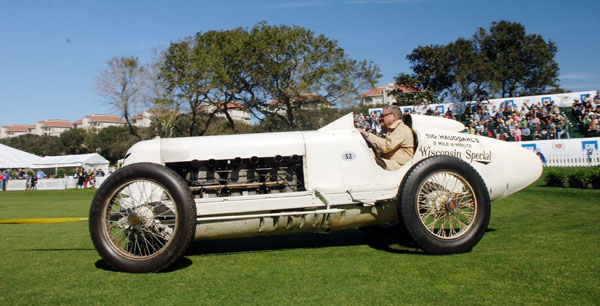 The Wisconsin Special was driven by Sig Haugdahl to over 180 mph on a one-way run at the Daytona Beach racing oval on April 7, 1922. Haugdahl built the car to prove he was a great race car driver. The heart of the Wisconsin Special was a 836-cubic-inch Wisconsin Special Airplane engine connected directly to the rear axle. The width of the car measured a mere 20 inches and was basically the width of the engine. To keep the car aerodynamic and stable at speeds, all exposed parts were taped, covered and smoothed. The boat-tailed rear end was designed to also reduce drag.

Haugdahl’s determination paid off, and he became the first person to travel three miles in a minute. The record-breaking run was never observed by the United States Auto Club governing body, as none of its members were present during the event. The unofficial record would stand for more than a decade.

The car was sold by Bonhams (since 1793) in Hershey, Pa., in 2002. To a car guy, “All roads lead to Hershey.” The Special was shown at the prestigious Amelia Island Flordia Concours d’Elegance at the Ritz-Calton in March of 2005. Pictures of the Special can be viewed at Conceptcarz.com search Wisconsin Special. A granddaughter of Sig, Linda Haugdahl Schainberg, lives in Flordia and plans to write a book about her grandpa.

More Letters to the Editor

Letter: It has been a good run as manager of Marion Ross theater

Letter: Thanks for support during Mentoring Month