Funeral services for Nancy Gayle (McGee) Sorum, 72, of Glenville, will be held at 2 p.m. today at Round Prairie Lutheran Church. The Rev. Kent Otterman will officiate. Interment will be at Round Prairie Cemetery. Visitation was from 4 to 7 p.m. Tuesday at Bayview/Freeborn Funeral Home and is one hour prior to the service at the church. To sign the guest book, go to www.bayviewfuneral.com. 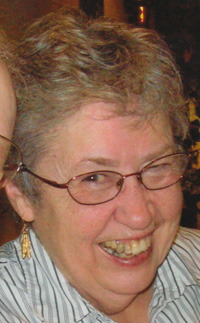 Nancy Gayle (McGee) Sorum was born on May 21, 1939, at home on her family farm near Fayetteville, Ark., to James and Sarah (Harris) McGee. She grew up on Mineral Mountain of Arkansas and graduated from Greenland High School in Arkansas. After graduation, Nancy attended nursing school at Sparks Hospital where she met her husband, Paul. On June 22, 1958, Nancy was united in marriage to Paul Sorum in Brentwood, Ark. The couple made their home in rural Glenville area and Nancy later finished her nursing degree in 1979 at Austin Community College. She worked as a Registered Nurse at Good Samaritan Society for 25 years. Nancy was a member of Round Prairie Lutheran Church where she was active in the Tabitha Circle and Lutheran church Women. She enjoyed quilting, baking and collecting dolls. Even though she lived far from her siblings, she enjoyed keeping in contact with them by long visits on the phone. Nancy loved spending time with her family, especially in the last few years her great-grandchildren brought her much joy. Nancy had a kind and caring spirit that will be truly missed by all who knew and loved her. Blessed be her memory.

Nancy was preceded in death by her parents: James and Sarah McGee; grandson, Jesse Wabbel; and brothers: Emmit and Hugh McGee.