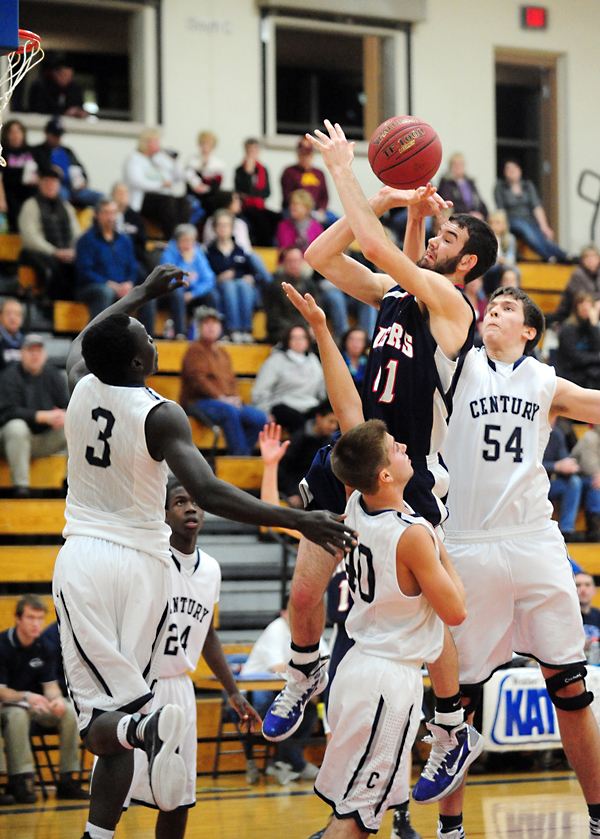 Albert Lea’s Kyle Ooms goes up for a shot on Tuesday around three Rochester Century players. Ooms had 25 points and seven rebounds in a 85-82 loss at Albert Lea High School. -- Andrew Dyrdal

The Albert Lea boys’ basketball team made three 3-pointers in the final 40 seconds on Tuesday against Rochester Century.

It just couldn’t make a fourth.

A last-second shot by Dylan See-Rockers from half court went over the backboard and the Tigers lost 85-82 to Big Nine Conference contender Rochester Century at Albert Lea High School.

It was the Tigers third loss by five or fewer points this season and broke a two-game winning streak, which tied the program’s longest since 2006.

“It was a great high school game,” Tigers coach Lucas Kreuscher said. “It was a great environment and it got pretty loud tonight, epecially at the end of the first half. I think both teams played well.”

The game had nine ties and 10 lead changes, and the Tigers’ Tyler Wichmann made a buzzer-beating layup to give Albert Lea a 41-40 edge at halftime.

The Panthers opened up a 58-52 lead with 11 minutes and 40 seconds left in the game, but the Tigers responded with a 17-6 run, puncuated by a steal and layup by Kyle Ooms, who had a game-high 25 points, to take a three-point lead with six minutes remaining.

After the Tigers turned the ball over on its next possession, Century made three consecutive 3-pointers to build a 74-71 lead and never trailed again.

Down 80-73 with less than one minute remaining, the Tigers’ Tyler Vandenheuvel made a 3-pointer to pull within four with 40 seconds left. After Century’s Matthew Buettner made two free throws, Wichmann connected on a 3 draw within 82-79, but the Panthers again answered with two free throws by Kevale Taylor.

Wichmann made another 3-pointer off an inbounds pass with three seconds left to pull within two, and Taylor made one of two foul shots with 1 1/2 seconds left to leave Albert Lea with a final shot to force overtime. The pass went to See-Rockers near the scorer’s table but his shot was too strong.

The Panthers made nine of its final 10 free throws and 17 of 22 overall to hold of the Tigers.

Wichmann had 19 points, five rebounds and six assists for the Albert Lea, and Vandenheuvel had 14.

“A lot of guys stepped up tonight,” Kreuscher said. “Vandy was big in the first half, Wichmann hit two bigs 3’s down the stretch and Kyle was Kyle.”

Kreuscher said the Tigers continue to improve but is looking for more than moral victories.

“We’re gaining confidence, and we continue to take steps forward,” he said.