Funeral services for Neil William Malmberg, of Albert Lea, will be held at 11 a.m. Saturday, at First Lutheran Church Chapel. The Rev. John Holt will officiate. Visitation will be one hour before service at the chapel. Interment will be in Oak Grove Cemetery, LaCrosse, Wis. Military honors will be accorded by Albert Lea Veterans Organizations. 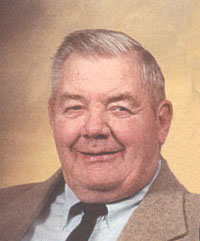 Neil was born at General Hospital in Minneapolis on Sept. 9, 1929, the son of Walter C. and Lois (Beadle) Malmberg. He was baptized and confirmed at Elim Lutheran Church in Robbinsdale and graduated from Robbinsdale High School. He enlisted in the United States Army on June 18, 1947, and spent that time at Fort Knox, Ky., and was honorably discharged on Nov. 30, 1948. He was a graduate of Minnesota School of Business in sales and advertising. Neil married DeLoris (Fritz) Mantzke on Aug. 9, 1952, at St. John’s Evangelical Lutheran Church in Sparta, Wis. He was a member of First Lutheran Church in Albert Lea. During his working career he worked at Bemis Bag in Minneapolis, Convair in San Diego, General Mills in Minneapolis, and UNIVAC in St. Paul, mainly in production control. In his younger years he liked to fish and hunt. He had a lifetime interest in following the stock market. In later years he regularly went fishing for a week with children and grandchildren and thoroughly enjoyed that in northern Wisconsin. He also loved watching the Minnesota Twins and Vikings and listening to Elvis Music. Neil and Deloris have lived in Albert Lea since 1976.

Neil was preceded in death by his parents; brothers: Keith and Dean; sister-in-law, Diane.