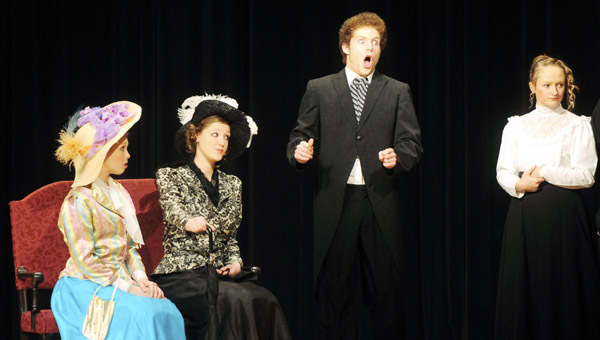 Jack Worthing, played by Matt Attig, is in shock when he finds out he has a brother he didn’t know about. -- Brandi Hagen/Albert Lea Tribune

Albert Lea’s one-act team was ranked first by all three judges at the sub-sectional tournament for its one-act play on Friday. They will move on to the section finals in Lakeville on Feb. 2 at 6 p.m.

Albert Lea students performed the play, “The Importance of Being Earnest,” by Oscar Wilde.

“The judges were very complimentary about the actors and how well they portrayed the style of the play,” Director Lilah Aas said. “They enjoyed the comedic bits the characters brought to life.” 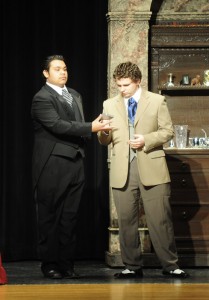 The servant, Lane, played by Sergio Salgado hands Algernon, played by Nick Bera, a cigarette case. Algernon wanted to use the case to blackmail Jack Worthing.

Aas said credit must also be given to John Fure for his set design and set changes because the judges loved his work.

The winner of the section finals will move on to the state competition Feb. 9 and 10. Albert Lea last competed at the state level in 2008.

“I think the students have had a good time, but a difficult time learning the parts and becoming English upperclass characters,” Aas said. “This is not American teenagers playing themselves. I was happy with how well they performed. They were focused and gave an excellent performance.”

Aas described the play as one that focuses on the lives of two bachelors who fall in love with young women, but under the name of Earnest in both cases. The silly women have dreamed of falling in love with a man named Earnest simply because they like the name. Eventually, the truth comes out and the women think they want to break it off. In the end, Jack, the main character learns that he actually was christened with the name of Earnest. It is a play with a domineering mother, two charming couples, a well-meaning clergyman, a determined governess and interesting servants.