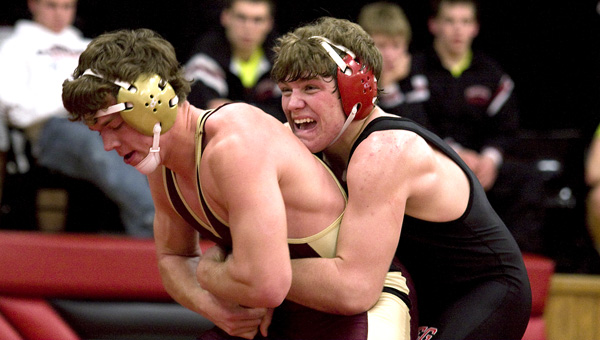 Seth Petranek wrestles Kysten Zierke during the invite at New Richland on Friday. Petranek had one pin, one decision and one forfeit. Brandi Hagen/Albert Lea Tribune

BEA led the match 12-0 until Esplan and Logan got their pins, at which it was tied up. After LeBlanc pinned Kolt Gorg at 138 pounds, NRHEG had the lead for the rest of the match.

Against BEA, NRHEG had a total of five pins and won two decisions.

In the second match against Triton, NRHEG’s Dylan Kubiatowicz pinned his opponent at 5:54.

During the third match-up, Triton’s no. 10 ranked Pat Ramirez had a major decision over Jade Waltz, 11-1. The only move Waltz was able to score on was an escape. Tyler Logan (132) and Goeff Ramaker (182) also lost decisions against Triton.

Triton had the lead with two falls, one major decision and one decision before Lassahn and Jake Staloch (152) pinned their opponents. They both pinned in the second period after a take down in the first. Once Staloch pinned Jorge Reyes at 1:54, the Panthers had the lead 21-19.

During the remaining matches, NRHEG accumlated three forfeits and a pin by Seth Petranek (220) against JT Schwering at :48.

The Panthers had a total of four pins, two decisions and three forfeits against Triton.

The final match against St. Clair ended with three pins and six forfeits. NRHEG led the match from the get-go.

Bryce Flowers (113) got the only fall for St. Clair when he pinned Ben Whitaker at 1:32. It was Whitaker’s third time being pinned in the invite. All of the forfeits were in favor of NRHEG.

54 of the points the Panthers scored throughout the invite came from forfeits.