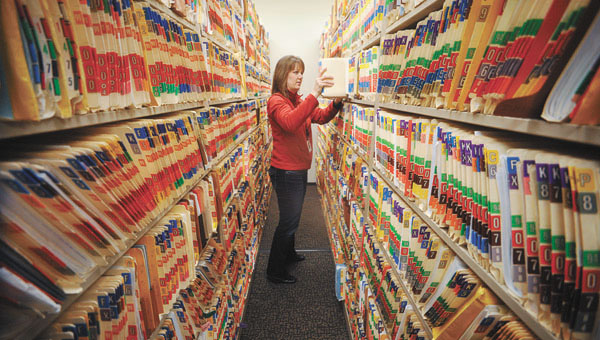 Minnesota’s courts are taking a bold step into the digital age.

The Minnesota Judicial Council is requiring all courts go paperless in about five years, a move that, though ripe with challenges, is being seen as a necessary step.

While many courts and cities have made similar moves, Rysavy, who’s served on the steering committee for eCourtMN, said Minnesota will be one of the first to do a statewide changeover.

For some counties, it’s a matter of space. Olmsted County District Court administrator Chuck Kjos said his county’s office will run out of floor space for files in about six to eight months.

Space isn’t a concern yet in Mower County, where new moveable filing cabinets still have open spots, according to Rysavy. 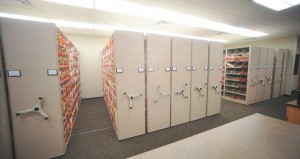 Rows of files fill the entire south wall of court administration at the Law Enforcement Center in Austin. The eCourtMN intiative is pushing toward eliminating this type of filing by getting Minnesota courts to go paperless.

But, the move will keep the courts on par with the direction of the private sector and the modern world.

“There’s not much question that the whole world — business, government, everyone — is going further and further into the electronic aspect,” Rysavy said. “If the judiciary gets left behind, the efficiencies go way, way down.”

The public will benefit from the change in that more information will be easily accessible.

“I don’t think there’s any question that the general public is going to have much greater access to the workings of the court system and the contents of files and all the rest of those things,” he said.

Though the benefits will be significant when the transition is complete, it won’t be an easy task getting there.

First, court employees will have to scan all current documents for electronic access, a step that will be highly labor intensive, according to Rysavy.

“We have to keep working while we do these things,” he said, which will be difficult since many courts are already at “bare bones” staff levels.

Court employees could be looking at overtime or part-time staff to handle imaging current documents, especially since Rysavy said the process will be more complicated than a simple scan. All documents will have to match the state court format for the website.

“Those are fairly complex steps, although they become easier as you develop the skills, the hardware and the software,” Rysavy said.

Along with labor, much of the conversion costs will be for software and technology.

Rysavy said local and state taxpayers shouldn’t feel the brunt of the costs. Much of the funding for the conversion will come from the federal 4-D program — money the federal courts reimburse to the state courts for enforcing federal responsibilities. However, Rysavy noted he has concerns about whether that’d be a permanent funding stream.

“It’s the same thing as drug courts: Everybody agrees they’re a great idea, you just have to have the money to run them, and if the money runs out, you’re not able to finish the project,” he said.

Despite the concerns, Rysavy said he believes there’s a strong commitment at the state and in the judiciary to finish the project.

Along with costs, a key challenge will be coordinating the change with non-court users, like the general public and justice partners: county attorneys, law enforcement and private attorneys. The private sector will be the more challenging side, he noted.

Accessibility will be a complex issue. Rysavy said the bulk of documents will be accessible, but the public won’t be able to alter the documents. At the same time, court officials will need to edit and change ongoing court documents. Other documents must remain confidential.

Security and backup are also key concerns. In case of a power or Internet outage, they’d have to go back to paper or they’d be greatly limited in what they could do. Still, Rysavy said he’s confident their plan to backup documents would be sufficient to not lose anything.

“The likelihood of something happening that you would lose all your backup is exceedingly small, and if that happens everything shuts down anyway,” Rysavy said.

“It’s one of the risks of the online world, and it always will be, and I don’t think that should prevent us from going forward,” Rysavy said.

Despite the multiple concerns, Rysavy said the people in charge are taking them seriously and are working to address all potential issues.

The conversion won’t completely eliminate the need for paper, because Rysavy said there will still be items that need to be on paper.

A growing number of people are representing themselves in court instead of hiring attorneys, and Rysavy said such individuals could keep feeding paper into the system if they’re not computer literate.

“The question that we have is: Will we have to continue to have a parallel paper file?” he said.

The courts must ensure people who aren’t computer literate still have the ability to represent themselves, even if they don’t have a computer background.

“That’s more daunting than it sounds like,” he said.

Within the next year, about three to six counties — likely none in the 3rd Judicial District — will pilot the image scanning phase. As those counties shift into filing new documents and teaching attorneys and law enforcement, the next group of counties will begin the imaging phase. With the staggered approach, Rysavy said the hope is the bugs will be worked out of the system by the time the bulk of the counties come online.

For local counties like Mower and Freeborn, Rysavy said it will take a minimum of two to three years before courts are eliminating stored paper documents in favor of online documents.

More technology won’t address what Rysavy described as a people issue in the number of court employees. In other words, the move isn’t likely to drastically speed up business at courthouses.