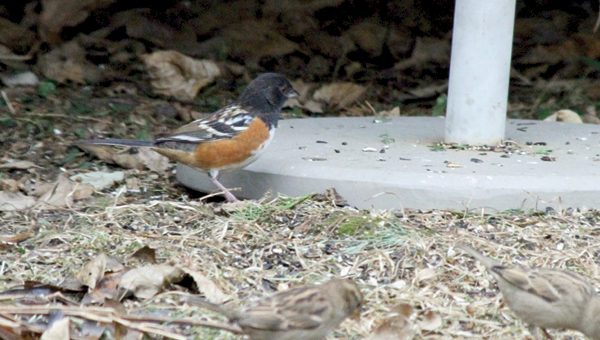 This spotted towhee was photographed in John and Sally Garry’s yard in December. It has remained in their yard since October. -- Submitted photo

AUSTIN — Something unusual visited John and Sally Garry’s backyard in October, but some find it even stranger that it hasn’t left.

This fall, the Garrys noticed a rare bird in their backyard: a spotted towhee. While it’s rare enough for an eastern towhee to visit the area, the spotted towhee, or western towhee, rarely makes its way east of western Iowa, local birders say.

The Garrys identified the bird with some reassurance from local bird watcher Pete Van Proosdy, who has never actually seen the bird in person.

After word spread to more local bird watchers, the Garrys had nearly a dozen visitors in their yard during the past weeks, hoping to catch a glimpse of the bird that is far off its beaten path.

“It’s a little bit strange,” John said about all the attention around his yard. “But it’s also been a lot of fun because the people have been so friendly and courteous.”

Austin Audubon members spotted the bird during the National Audubon Society’s recent Christmas Bird Count, which made it the 100th species recorded on Austin’s Christmas bird count in more than 30 years of counting.

“In all the years we’ve been doing this count, we’ve never had a spotted towhee, so what can you say?” said Larry Dolphin, Jay C. Hormel Nature Center director and Austin Audubon vice president.

All the excitement over one bird has sparked some more interest within the Garry family, too. John said his kids have taken an interest in the bird, while he and his wife have now taken more of an interest in photography.

“It actually motivated us to buy a real camera,” John said.

Though Dolphin has waited his turn to see the bird, it has not yet graced his presence. Dolphin and many others point to the ultra-mild winter as a reason why the bird may be hanging around. Without a mate nearby, Dolphin suspects the bird will migrate out of the region at some point this spring.

Austin Audubon members have encountered plenty of rare sightings during their Christmas bird counts, such as the bufflehead or great blue heron. However, the spotted towhee may rank at the top.