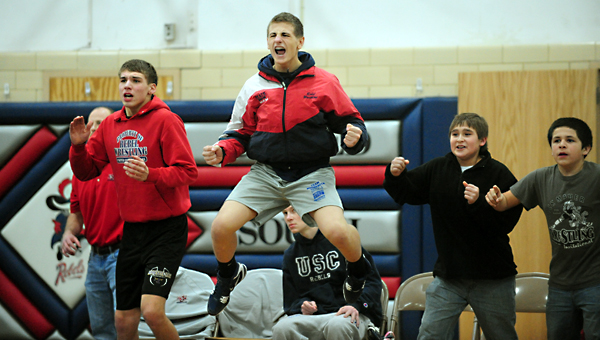 WELLS — When the ball started rolling, it never stopped.

The United South Central wrestling team recorded six pins on Thursday, including four in the final six matches, to stun No. 12-ranked New Richland-Hartland-Ellendale-Geneva 50-24 in Wells.

“I’m very excited about that match,” Rebels coach Marcus Eytcheson said. “There were a lot of awesome things 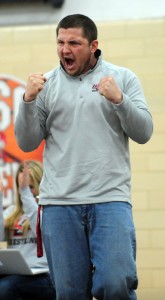 by a lot of different kids.”

After the Rebels cruised to a 23-6 lead, the Panthers stormed back, winning three straight matches by two falls and a forfeit to take a 24-23 advantage. NRHEG looked set to widen its lead when 170-pounder Dillon Parpart built a 3-0 lead over Logan Sonnek in the second period and showed no signs of stopping.

Just then, Sonnek stuck Parpart on his back and pinned him at the 3:08 mark, igniting a flame in the Rebels’ gym and cueing a 27-0 run to end the dual.

“It was a combination of USC wrestling well and we were pitiful,” Panthers coach Paul Cyr said. “We were pitiful from the time of weigh in when we couldn’t make weight the way we were supposed to. We were pitiful the whole night.”

Cyr credited Panthers Dustin Esplan (126) and David Lassahn (145), who notched two of the team’s three falls, but was disappointed in other seniors, including Jade Waltz (120), who lost a 14-1 major decision to Jacob Gonsalez, and third-ranked Seth Petranek (182), who was edged 8-7 by No. 5 Brady Thisius.

“If we stayed here, Lassahn is going to beat (Skylar Peterson) until next year at this time — Esplan, the same thing. But if you look at Waltz, he didn’t even give us an effort. Thisius is leaning on Petranek and we don’t even shoot a double-leg?

“We deserved to lose.” 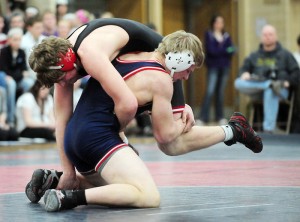 The most anticipated match of the night was between two top 5-ranked 182-pounders, the Panthers’ Petranek and Rebels’ Thisius.

With the Rebels leaning on a 32-24 lead, still nowhere near a safe margin, Thisius came out firing with a takedown within the match’s opening 10 seconds. The Rebels’ senior led 2-1 after the first period, but a four-point second gave Petranek a 5-4 edge entering the third.

It was a familiar situation for the two veterans, who wrestled last season at 189 pounds when NRHEG beat USC 32-23 to earn the Gopher Conference title. That year, Thisius held onto a 6-5 lead going into the final period but was pinned in overtime by Petranek.

Thisius earned a reverse and takedown in the first and held Petranek to two escapes as he hung on to win 8-7.

“I feel great,” Thisius said. “This was the last home match of my career so it was really special to get a big win 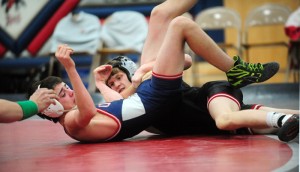 “When he shot in, he went after it,” Eytcheson said. “He finished it at the end of the match when his job was just to circle it out and hold onto the lead. He did exactly what he needed to do — stay out of trouble.”

The Rebels’ seventh-ranked sophomore Colton Carlson bumped up two weight classes to face senior Geoff Ramaker at 195 pounds. Carlson led 5-0 nearing the end of the second but pinned Ramaker with four seconds left in the period to build a 38-24 lead and seal the 26-point upset. 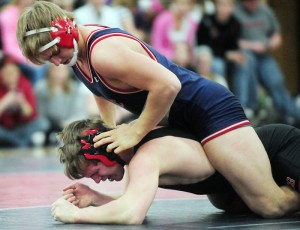 “I’m really excited,” Carlson said. “I feel like I just won state. I’m proud of my teammates. I didn’t think we were going to beat them by this much. I knew had a chance, but I’m just very happy with it.”

The Rebels’ David Mertens and Nathan Mulenbeck capped off the rout with two pins to run the team’s point total to 50.

“There’s no better way to finish out a dual meet than falls coming out of the top,” Eytcheson said.