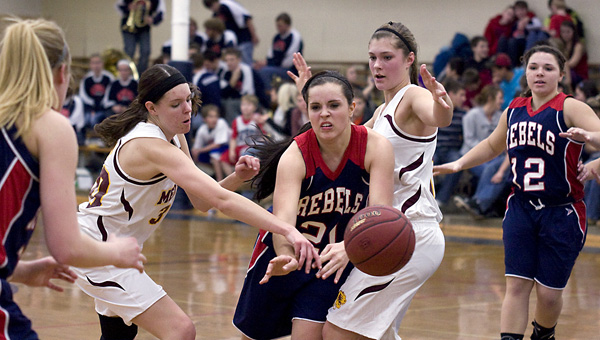 After the Tigers’ huge loss to New-Richland-Hartland-Ellendale-Geneva 90-22 on Tuesday, the Rebel girls weren’t sure what to expect going into the game.

What they did know was they needed to keep a close watch on Medford’s Nicole Morgan, the No. 2-ranked scorer in the Gopher Conference.

“We focused on her until the end of the game,” USC coach Stu Hendrickson said. “She got a bunch of the points at the end but we really shut her down for part of the game.”

Amanda Allis won the tipoff in the first period but Medford scored the first points with 17:05 on the clock.

Kristie sunk a 3-pointer with just under 14 minutes left, and Medford scored once more before the Rebels took the lead for the rest of the game. 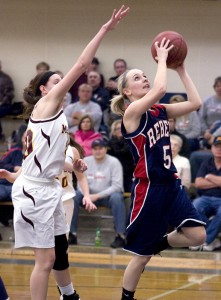 Rebels' Kristie Ovrebo does a layup during the second half of the game against Medford on Thursday. Overbo led the Rebels with 21 points. Brandi Hagen/Albert Lea Tribune

A free throw by Allie Voigt at 13:15 tied the game 4-4. USC was allowed a seven-point run before Medford could score again.

With a 20-11 lead, Katie Overbo took a shot with one second left in the first half but it didn’t fall.

“It was really sloppy at first,” said Kristie. “The second half we worked through it and got the game done.”

Changes made to the Rebels offense in the second period was a key strategy.

“Our offense came alive,” Kristie said. “We changed it back to a four out so we had more open lanes.”

With the help of her teammates in the second, Kristie plowed past Medford scoring 10 points in a row for USC.

USC was able to hold Medford from scoring for the first 6 1/2 minutes until Tigers’ Krista Krogh stole the ball and made a break toward the Rebels’ basket, scoring two points.

Still coming up short 36-15, Medford pushed hard during the last eight minutes of the game to score their other 15 points. It would have brought the game closer but USC kept up and scored 16 points during that time.

“We pride ourselves in our defense,” Hendrickson said. “That’s what won the game.”

USC’s next game is away at Bethlehem Academy on Tuesday at 7:15 p.m.