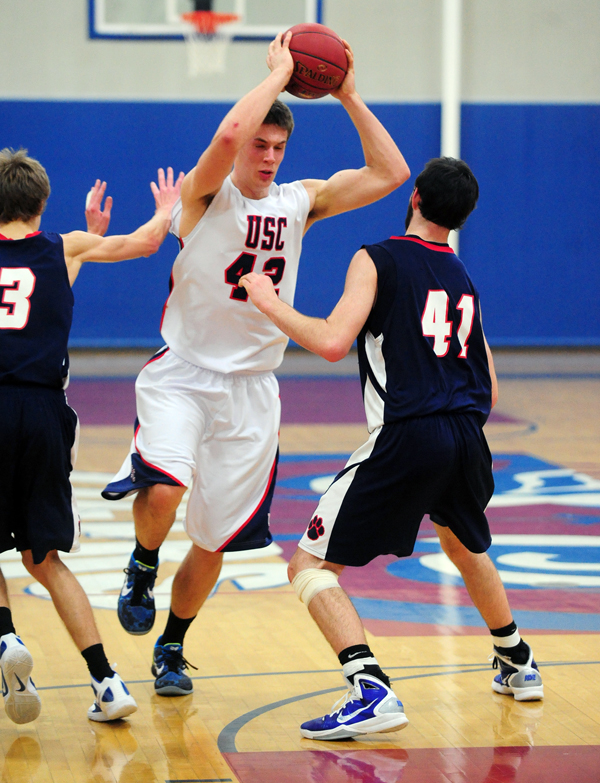 The Albert Lea boys’ basketball team held United South Central’s star, Kyle Bauman, to just four points through most of the first half on Tuesday and led 38-32 with seconds remaining in a back-and-forth half.

After the Rebels threw up a desperation layup, Bauman was there for the tip-in as time expired and that was all the momentum USC needed heading into halftime. 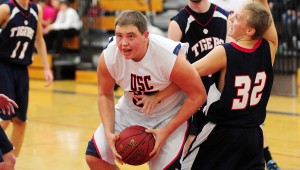 Bauman scored 15 second-half points and finished with 18 rebounds and seven blocks as the Rebels outscored the Tigers 37-21 after the break and won 71-59 at Albert Lea High School.

“We just came out with a little more intensity and fire in the second half,” said Bauman, who also notched a team-high seven assists. “In the first half we played a little soft and at halftime were told to buckle down and get after these guys.”

After being outdueled by the Tigers’ leading scorer, Kyle Ooms, in the first half, Bauman held the senior forward in check after the break. It was a tale of two halves as Bauman and Ooms battled in the paint. Ooms had 13 points in the first half to Bauman’s six, but two in the second to his 15.

“Bauman pretty much took it upon himself to step up and say ‘I got to play better in the second half,’” Rebels coach Robert Stevermer said. “That’s mainly what happened.”

The Rebels outscored the Tigers 50-26 in the paint and had four players reach double figures including Bauman with 21, Steve Voigt 14, Trey Allis 13 and Jason Huper 10.

The Tigers took control of the game early by going on a 15-2 run after falling behind 4-0 to start. 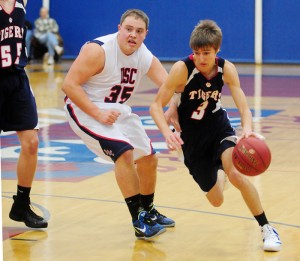 The Rebels cut the Tigers’ lead to four with 9:10 left in the first half, but back-to-back field goals by Evan Templeman and a 3-pointer by Tyler Wichmann, who had 18 points, extended Albert Lea’s lead back to 26-17.

The Rebels’ Tyler Lackey and Chris Melby answered with 3’s to pull USC to within 26-23, but Tyler Vandenheuvel hit a 3 and Wichmann made two more as the Tigers extended its lead back to 35-26 with 2:50 to go.

That’s when USC began its run, though, as it outscored the Tigers 8-4 to finish the half and 42-23 over the game’s final 20 minutes.

“A lot of credit to USC,” Kreuscher said. “They deserved to win. They worked a lot harder than us.”

The 71 points was the Rebels’ second-highest total in nine games this season. USC needed all the offense it could get against the Tigers, who came in averaging 62 points per game, the fourth most in the Big Nine Conference.

“Albert Lea puts up a lot of points and they have some kids that can score, so it was a good test for us,” Stevermer said.

The Tigers shot well out of the gates but cooled in the second half after hitting five 3-pointers before the break. Albert Lea shot 35 percent for the game, and the Rebels shot 48 percent but just 9 for 22 from the free throw line.

Kreuscher said the Tigers’ inconsistency on offense led the breakdowns on defense.

“I think our struggles on offense affected us on defense,” the third-year head coach said. “We were worried about making shots on the offensive end and didn’t work hard enough on defense.”

Both teams headed into some of their toughest games of the season following Tuesday’s contest.

Stevermer said the Rebels’ triple-overtime win over Blue Earth on Dec. 28 and the win over Albert Lea helps the team’s confidence going forward.

“To come in here to an unfamiliar setting, a place we haven’t played in years, I think it’s got to help our confidence quite a bit,” he said.