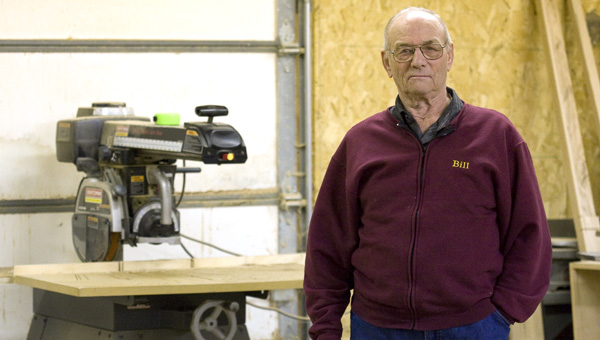 Bill Wittmer stands among the tools and sawdust in his garage workshop in Alden. Wittmer retired in 1990 and started woodworking to keep him busy. -- Brandi Hagen/Albert Lea Tribune

ALDEN — He makes rocking chairs, but you won’t find him resting in one for long.

Bill Wittmer retired from working in the Alden-Conger School District in 1990 but has since picked up woodworking to keep him busy.

He puts in eight to 10 hour days once he gets going on a project.

Still enjoying retirement, his work schedule is “whenever I feel like it.”

When he started woodworking, Wittmer made lawn ornaments, which were mostly animals. To make the wood creatures more realistic, Wittmer and his wife, Verliss, finished them off with a paint job.

For his own pleasure, Wittmer made three skunks for his garden.

“The dogs bark at them, the cats jump in the air when they see them, and the birds won’t come close,” Wittmer said with a smile.

Many of the lawn ornaments he tried just didn’t come out the way he had envisioned, so he gave up making them. He instead focused on making furniture.

His pride and joy, a platform rocker, sits in a three-season porch just off the side of his home. He made it about eight years ago.

He estimates that 10 percent of the furniture in his home is something he made.

With just a few steps in his home, one could see several pieces he constructed, such as a large shelving unit to house his collection of model semis, a flower box for Verliss’ plants, a grandfather clock that chimes every hour and several tables.

“If we need something,” Wittmer said. “I’m probably going to make it.”

He also saws time away making quilt racks, toy chests, benches, bookshelves and whatever else he can come up with or that people ask for. He incorporates a distinctive aspect to each project so when he’s long gone, he has left a mark.

He said years of being a farmer and a custodian have taught him a lot of what he knows. The rest, he reads in magazines, books or learns from the good friends he made while at the school.

Wittmer worked as a farmer until his health didn’t allow him to, spent 25 years as a custodian and 30 to 40 years as a bus driver for the Alden-Conger School before retiring.

“As of today, these kids I had on the bus route, they know me, and that is the greatest thing that happens,” Wittmer said. “There is nothing better than someone knowing you.”

Staying involved with the Alden community even after retirement, Wittmer has helped to remodel Redeemer Lutheran Church to make it handicap-accessible, worked on projects with the Alden Lions Club and, with the help of three other people, started the town’s winter festival.