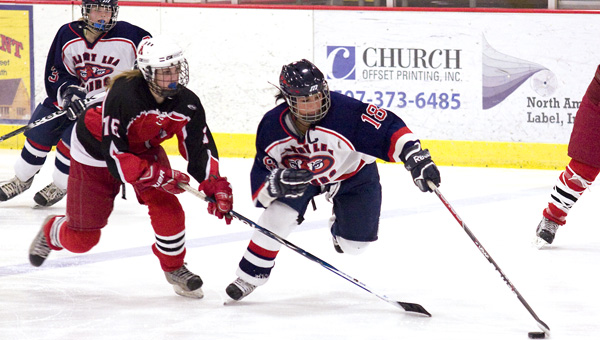 Natasha Moyer reaches for the puck during a home game against Austin on Tuesday. Albert Lea had more total shots than Austin 33-28 but Austin took more quality shots to get their 4-3 win. Brandi Hagen/Albert Lea Tribune

Albert Lea girls hockey came up short during their game against Austin on Tuesday. The Tigers lost 4-3 after a comeback in the third period. 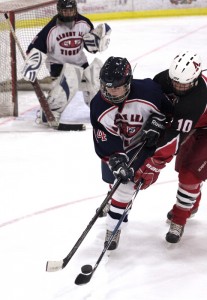 The Tigers outshot the Packers in the first period 11-5, but weren’t able to get the puck past Austin’s goalie Allison Hoban.

Just over nine minutes remaining in the first, Austin’s Abby Gallaher and Carley Grunewald scored within 20 seconds of each other, giving the Packers a 2-0 lead.

There was plenty of opportunity for the Tigers to score in the period but they struggled to get the puck into the net.

“As a team, we need to learn to hit the net and pick our spots better when we’re shooting the puck,” Tigers coach Paul Willet said. “It definitely cost us tonight.”

Mariah Leach scored a short-handed goal for Albert Lea at 7:30 in the second period, assisted by Sam Stanley. It wasn’t enough to take the look of discouragement away from the Tigers’ faces, though, as the Packers still led 2-1.

“Their top line was playing very well against us in the second period and we were tired,” Willett said. “The ice was pretty soft tonight and it definitely showed, at least for us.”

The Tigers were outshot in the second 12-9.

A goal by Albert Lea’s Sydney Overgaard with 5:07 remaining gave the Tigers hope. Overgaard was assisted by Hannah Savelkoul.

The competition became fierce as Leach, assisted by Anna Anderson, led the Tigers to a 3-3 tie on a powerplay with 3 1/2 minutes remaining.

When Austin’s Kennedy Thompson scored with two minutes left in the game, Albert Lea didn’t give up.

The Tigers were close to scoring with 27 seconds remaining, but it was covered by Hoban leaving Austin with the win.

“The kids showed a lot of guts and a lot of heart coming back,” Willet said. “ To come back late in the game like that, tie it up and have an opportunity to win shows what these kids are made of. Even after a tough season, they’re still battling.”

Willet said his team can build on the effort they put forth in the third period on Tuesday and hopefully can win some games in the playoffs in a couple weeks.