Memorial services for Russell Allan Moffitt, 72, of Albert Lea, were held at 11 a.m. today at Salem Lutheran Church. The Rev. Mark Niethammer officiated. Interment was at Hillcrest Cemetery with military honors accorded by Freeborn County area veteran’s organizations. Visitation was one hour prior to the service at the church. To sign the guest book, go to www.bayviewfuneral.com. 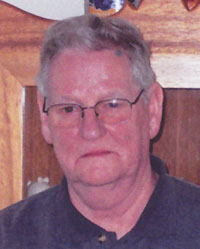 Russell Allan Moffitt was born on Feb. 20, 1939, to Jesse and Laura (Fessler) Moffitt in Maple Hill, Iowa. He grew up and attended school in Estherville, Iowa. Russell served in the United States National Guard for 19 years. On Dec. 27, 1959, he was united in marriage to Marcia Winterton at the Immanuel Evangelical Lutheran Church in Gruver, Iowa. The couple moved to the Albert Lea area where Russell was employed at Farmstead Foods. He was a member of Salem Lutheran Church and the Moose Lodge. Russell enjoyed playing guitar, fishing and going to the state park. He especially treasured the time spent with his grandchildren.

Russell was preceded in death by his parents; one brother; and granddaughter, Christa Moffitt.