The celebration of God’s faithfulness to His child, Ruth Bouma Louters, 89, formerly of Hollandale, will be held at 2:30 p.m. Friday at Hollandale Christian Reformed Church. The Rev. Michael Bentley and Rev. Michael Goodwin will officiate. Interment will be at Hollandale Cemetery. Visitation will begin at 1 p.m. Friday at the church. To sign the guest book, go to www.bayviewfuneral.com. 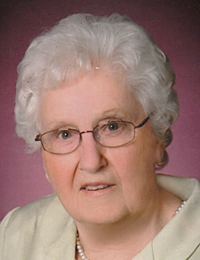 Ruth Bouma Louters was born on Sept. 18, 1922, to John and Anna (Wagnaar) Bouma in Redlands, Calif. She grew up in Redlands where she was a member of the Protestant Reformed Church of Redlands. Ruth graduated from Redlands High School in 1939. Ruth then trained and worked in the photography department at Norton Air Force Base at San Bernadino, Calif.. On Oct. 4, 1945, Ruth was united in marriage to Herman Louters in Redlands. They lived in Raymond from 1945-1959. After the sudden death of her husband at the age of 42, she continued to raise their six children with God’s strength and guidance. Ruth and her children moved to Hollandale in 1959. Ruth worked for the Hollandale Marketing Association and also as a home health care provider. She was an avid reader and loved to help people whenever she could. Her faith was a very important part of her life and she had been a member of the Hollandale Christian Reformed Church for more than 50 years. Ruth was a devoted mother and had been active as a 4-H leader and president of the Mother’s Club of Hollandale Christian School. She also played organ and piano at her church for many years. Ruth’s devotion to her Lord and family left a lifetime legacy for her family to treasure. Her wish is that they always remember to “Seek First the Kingdom of God!”