Memorial services for Shirley Deane Beck, 88, of Albert Lea will be held at 1:30 p.m. Tuesday at Bayview/Freeborn Funeral Home. The Rev. Todd Walsh will officiate. Burial will be at Hillcrest Cemetery. Visitation will be one hour prior to the services at the chapel. To sign the guestbook go to www.bayviewfuneral.com. 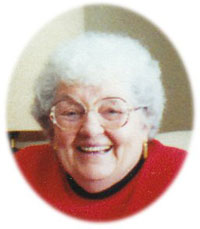 Shirley Deane Beck was born on Dec. 12, 1923, in Albert Lea, the daughter of Goodwin and Gladys (Hoverson) Schiager. She attended and graduated from Albert Lea High School. On Dec. 12, 1944, Shirley was united in marriage to Ray Beck at First Lutheran Church. Shirley worked at Wilson’s Meat Packing Plant in the payroll department for 25 years. She also worked for American Gas where she made little cooking stoves for the military. Shirley was a member of Grace Lutheran Church and the Albert Lea Legion Auxiliary for 55 years. She loved to knit caps, mittens and scarfs and give them to family and friends and also to newborn infants at Naeve Hospital. Shirley enjoyed crossword puzzles and watching game shows on TV and reading. She always kept her candy drawer full so she could give to people that would visit. Her cat, Nellie, was a great comfort to her. Playing bingo at St. John’s was so enjoyable for her especially when her great grandchildren came to play with her.

The family would like to thank Crossroads Community Hospice and St. John’s Lutheran Home staff for the wonderful care given to Shirley. Blessed be her memory.