Shooting for a cure 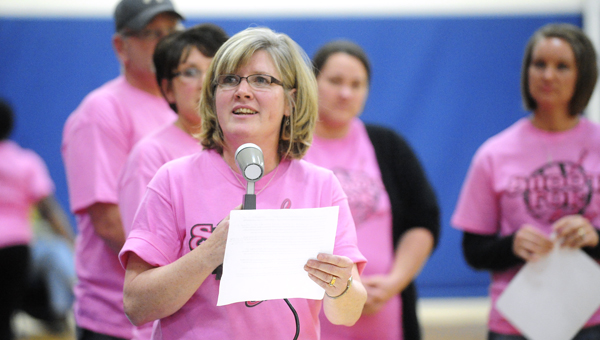 Kathy Niebuhr presents a donation for the Relay for Life on Tuesday during a Coaches vs. Cancer event. The event took place throughout the Albert Lea girls’ basketball game against Owatonna and raised $400. -- Brandi Hagen/Albert Lea Tribune

A Coaches vs. Cancer event was hosted during the Albert Lea girls’ basketball’s home game on Tuesday. Off the court, players from Owatonna and Albert Lea put their competitive sides away to raise cancer awareness.

“I think giving awareness is a teaching time for the kids to understand there is something more than just this game,” Huskies coach Kristopher Evje said. “Yeah, they’re our opponents tonight, but we’re working together for a bigger cause.” 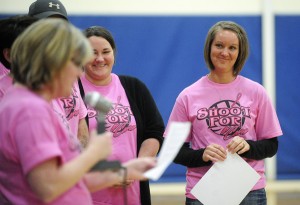 Basketballs cut from paper hung on a wall with names of loved ones Tigers and Huskies players wanted to recognize for their fight with cancer.

During warm ups, the Tigers wore pink shirts that on the front said, “shooting for a cure” and on the back, “turn it pink.” The Huskies also sported pink shirts that they designed for their own coaches for cancer event.

The pink shirts were sold as a fundraiser to parents, friends and supporters of the girls’ basketball team. Jensprint, out of Manchester made a donation for a portion of each shirt sold to the Relay for Life.

At the start of the game, Diane Heaney, the choir director at Albert Lea High School, sang the National Anthem. Heaney herself is a recent cancer survivor.

Members of the Tigers boys’ basketball team, along with other students, painted their bodies with pink paint and stood shouting from the sidelines for the entirety of the game.

At halftime, a donation totaling $320 was presented to athletic trainer, Afton Wacholz.

The donation was presented to Wacholz because her mother, Nancy Delger, who had breast cancer and passed away four years ago. Delger was a dedicated supporter of the girls’ basketball program so the donation was made in honor of her memory and work.

“I don’t think she got the appreciation she deserved while she was around,” Wacholz said. “But, I think she was smiling down on us tonight.”

Delger’s close group of friends, who have been nicknamed the “bosom buddies” sat in the bleachers on Tuesday wearing pink vests and basketball shirts.

Wacholz said the women joked with her they were “taking one for the team” just for Delger because they are hockey fans and they felt odd wearing basketball tees.

The bosom buddies weren’t the only ones wearing pink. The crowd was littered with people wearing their shooting for a cure shirts, men and women alike.

The current donation total is up to $400 and assistant coach Cassie Gorman will be making a donation based on the number of points the girls made during their Tuesday game, which was 50.

“The message we wanted to send was that cancer impacts the lives of our students and those around them,” Kathy Niebuhr said. Niebuhr helped to plan the event and currently works as a media specialist for the Albert Lea School District. “This is an opportunity to bring awareness to that as well as give back to a community group that supports other families in our community.”