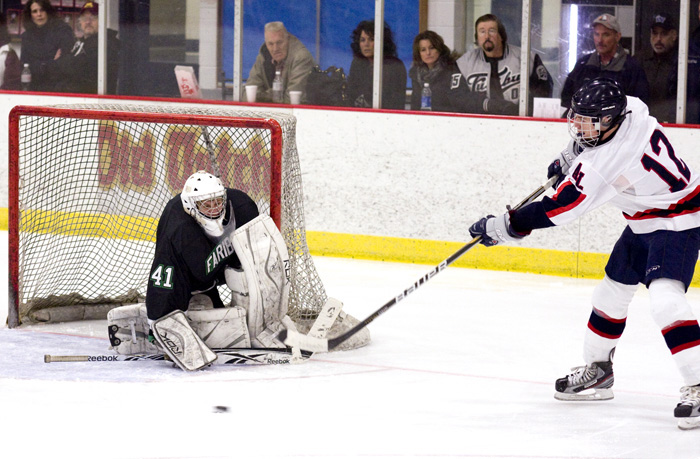 Joshua Martin takes a shot on goal but was blocked by Faribault's Cody Morsching. Martin had one assist in the third period to Levi Hacker while Albert Lea was short-handed. Brandi Hagen/Albert Lea Tribune

Nathan Stadheim led Albert Lea to an 8-3 win against Faribault on Tuesday at Roy Nystrom arena. He scored four of the Tigers’ eight goals, all assisted.

“I was expecting a much closer score because we are a pretty young team,” said Tigers coach Roy Nystrom. “But we kind of opened it up in the second and Stadheim really went to work tonight.” 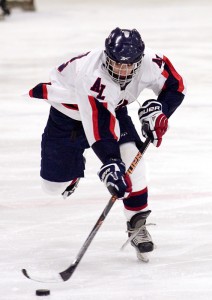 Adam Herbst skates towards the net during the first period of Tuesday's game against Faribault. Herbst had one assist to Nathan Stadheim while the Tigers were short-handed in the second period. Brandi Hagen/Albert Lea Tribune

With 10 minutes and 34 seconds left in the first period, Faribault’s Jacob Fritz scored the first goal of the game unassisted. Just over a minute later, Levi Hacker scored for Albert Lea.

Faribault lost Jacob Dickison to the penalty box at 10:45 and Stadheim made a power-play goal at 10:11, assisted by Kohl Kriewall and Hacker.

Faribault’s Blake Langerud scored a power-play goal at 12:40. Adam Herbst was just getting out of the penalty box when it was scored and Cody Haaland was still in for tripping.

At 15:22, Stadheim made another power-play goal assisted by Cody Haaland to end the first period with the Tigers leading 4-2.

Circling Faribault’s net for quite awhile, Albert Lea took many shots but none were good enough to score. Adrenaline rushed at 11:14 when the puck stopped just short of a goal for the Tigers.

“We had a lot of real scoring opportunities where we never even hit the net,” said Nystrom. “But we were swarming the net the entire evening and I thought that offensively we looked pretty good.”

In the first period, Faribault outshot Albert Lea 12-11. In the second period, it was the Tigers leading the shots 21-8.

Going into the third period, Albert Lea had Joshua Martin in the penalty box, but Faribault still wasn’t able to score. Instead, the first goal was made by Larry Olson on a power play at 1:43 assisted by Haaland and Lewis Kelly.

Tuesday’s game was Martin’s first since being out for an injury. There are still five players sitting out for the Tigers.

At 6:46, Langerud scored Faribault’s last point with an assist from Fritz.

With 3:28 left to go, Hacker scored another short-handed goal for the Tigers with an assist from Martin.

For the remaining two minutes, Albert Lea and Faribault both served penalties to end the game.

Albert Lea had six shots on goal in the third period to Faribault’s five.

“We started a little slow, but we had a good second period and we kind of iced it away,” said Nystrom. “We came out in the third and played well enough to hold onto the lead.”