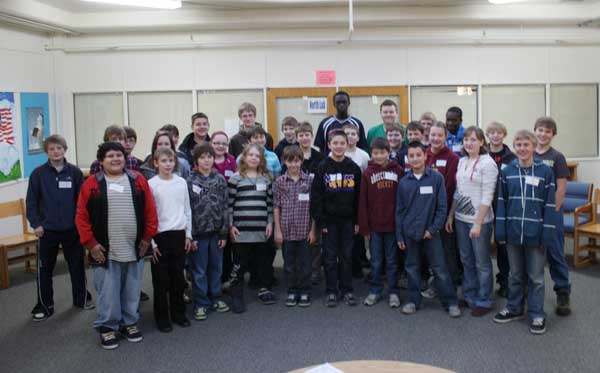 The kickoff for this year’s bee was the week of Nov. 14, 2011, with thousands of schools around the United States and in the five U.S. territories participating. The school winners, including Benjamin Seavey, will now take a written test; up to 100 of the top scores in each state will be eligible to compete in their state bee on March 30, 2012.

The National Geographic Society will provide an all-expenses-paid trip to Washington, D.C., for state champions and teacher-escorts to participate in the Bee national championship rounds on May 22-24, 2012. The first-place national winner will receive a $25,000 college scholarship, a lifetime membership in the Society, and a trip to the Galapagos Islands, courtesy of Lindblad Expeditions and National Geographic.

The National Geographic Society is one of the world’s largest nonprofit scientific and educational organizations. Founded in 1888 to “increase and diffuse geographic knowledge,” the Society’s mission is to inspire people to care about the planet. It reaches more than 400 million people worldwide each month through its official journal, National Geographic, and other magazines; National Geographic Channel; television documentaries; music; radio; films; books; DVDs; maps; exhibitions; live events; school publishing programs; interactive media; and merchandise.