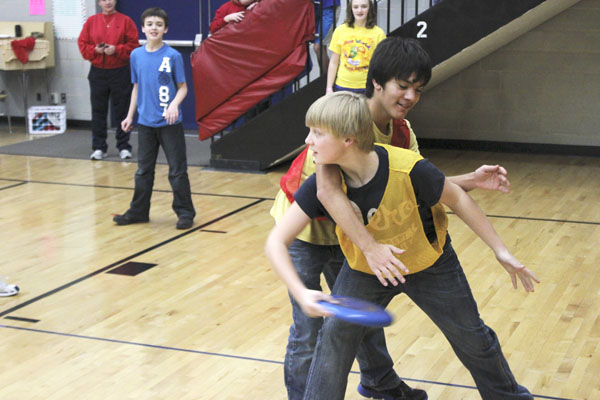 Ricky Ortiz guards Cody Ball rather closely Tuesday during a game of ultimate in physical education class at the Southwest Middle School gymnasium. The two boys were playing hard against each other the whole game. Behind them are Cody Ausen and Katie Boettcher. -- Tim Engstrom/Albert Lea Tribune

Ultimate is a game played outside on college campuses across the country. So it might seem strange that Southwest Middle School students play it inside in the middle of winter. 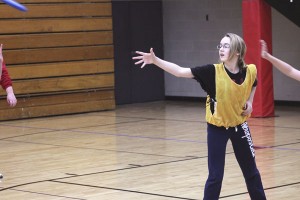 Hannah Berven tosses a disc toward a teammate Tuesday at the Southwest Middle School gymnasium while playing ultimate in physical education class.

Hansen said ultimate gets kids moving, even ones who usually don’t like phys-ed class.

“Some kids get sweatier playing ultimate than the PACER,” Hansen said. “They don’t realize they are working out because they are playing.”

Hansen said she and teacher Brenda Morris, for whom Harves was substituting Tuesday, purchased ultimate discs about five years ago after the six tennis courts at Southwest Middle became three courts.

She said they couldn’t have half a class standing around while the other half played tennis; the sport was growing and discs were well within their budget. Plus, Southwest has a large campus, so there’s plenty of room to run.

Children like to play the game in the gymnasium, too. In the middle of winter, ultimate gives them a chance to do an outdoor sport. Hansen said, more importantly, ultimate requires them to implement strategies and solve problems as a team to reach a goal. 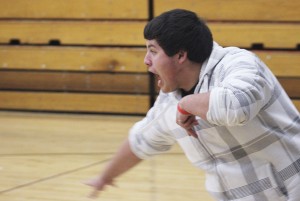 Sam Stout chucks a disc across the Southwest Middle School gymnasium during a “kickoff” in a game of ultimate in physical education class.

The teachers explained the rules of the game after the children were done stretching, but they pretty much left much of the strategy up to the kids to solve. They soon learned that it pays to throw shorter than longer and, if they go for an interception, they better be sure to catch the disc. Drops go to the opposing team of the player who last touched it.

Ultimate used to be called Ultimate Frisbee. However, Frisbee is a term trademarked by Wham-O, and many companies make flying discs. The name morphed into simply ultimate, though the old name is tossed out time to time.

Players of the sport set boundaries and end zones, often using a football field or a soccer field or any grassy space. They advance toward their end zone by tossing a 175-gram disc to teammates, usually seven to a team. They cannot run or hand off the disc. They throw it from where they caught it until the object is caught by a player in the end zone, which results in the score of a single point.

After a score, players lineup for what is the equivalent of a kickoff in football. In ultimate, it is called a “pull.”

For indoor ultimate, the bleachers and the middle curtain were the boundaries. Players could catch discs that bounced off the walls. The end zones were the baselines for the basketball courts. There were six to a team.

Hansen said the game is easy to set up and easy to play. For middle-schoolers, it helps to have a game with simple rules.

Southwest Middle School two years ago purchased nine disc golf baskets and some disc golf discs. The students play on the Southwest campus, at times even designing the course. Teachers last year took 27 students on an explore-the-community trip to the disc golf course at Bancroft Bay Park. Hansen said they want to take another trip this spring to the one at Riverland Community College.

Hansen said the school wants to teach children lifelong sports, not just ones they play in their youth.

“We introduce it to them with the hopes they can do on their own time, outside of school,” she said.

She pointed to volleyball as another sport the phys-ed teachers spend time with students on, because people often play that one recreationally as they age, too.

“It goes back to the fun of play. What’s going to keep you moving?”