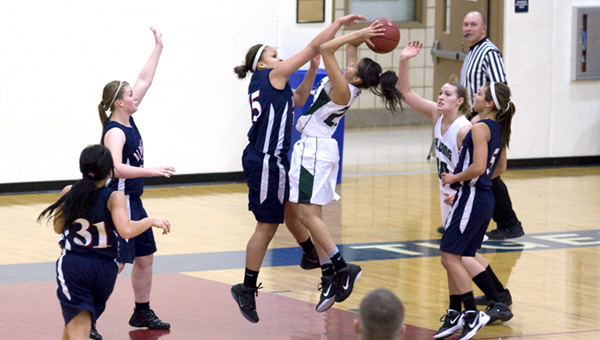 Dominque Villarreal stops Faribault's Kayla Tinklenberg from shooting on Friday at Albert Lea High School. Villarreal made a free throw that tied up the game to go into overtime. Brandi Hagen/Albert Lea Tribune

Albert Lea had a 20-7 lead on the Falcons after 11 minutes of the first half.

With just 5 1/2 minutes to go, Dani Behrens made a basket for Faribault and from there, the Falcons picked up eight points from free throws and two other baskets, closing in on the Tigers 26-25.

Bryn Woodside and Lindsey Stewart led the Tigers in the first half with six points each.

Facing a tie at the start of the second, the Tigers were ready to play.

“We re-grouped and came out with intensity,” said Woodside. “Each of us knew our role and just put it together.”

Woodside opened the second period with eight points to the Falcons six. About 2 minutes later, the Falcons brought the score to 34-34 tie.

Tensions were high for the 11 remaining minutes as the two teams fought for the lead.

The game was tied up eight different times with the Falcons leading just twice. Rebounds became an important part of the game as the time dwindled away.

“Sometimes you have to rebound when you’re not shooting it well,” Tigers coach Sean Gillam said. “I think the rebounding was outstanding.”

At 2:04, the Tigers were down 51-49. After a time-out called by Faribault, Villarreal lined up for two free throws. The first took its time swirling around the rim before bouncing out. The second, fell right in, leaving the Tigers just one point behind.

After two layup attempts by the Tigers and two Falcon chances at free throws, the score remained in favor of Faribault 51-50.

With the pressure of taking her team into overtime, Villarreal took a deep breath and made a free throw with 17.3 seconds left of the second half to tie the Falcons 51-51.

Adrenaline rushing through the crowd and players, the Tigers calmed themselves down to finish the game in overtime.

Woodside scored just 40 seconds in and the crowd exploded. But, the shot was returned by Faribault’s Cecilia Hake just ten seconds later.

Albert Lea was able to outscore Faribault in overtime 10-5 for the win.

“I think what got us the win was just never ever stopping, continually trying to fight back,” Gillam said. “Always believing we’re in it and that comes from the leadership in the guards.”

For the first time in several games, the lady Tigers walked off the court in smiles.

“It feels good to get that W, but we definitely can’t be satisfied with the way we played,” Woodside said. “A win’s a win but we really have a lot to work on, we want to get more wins than just one.”