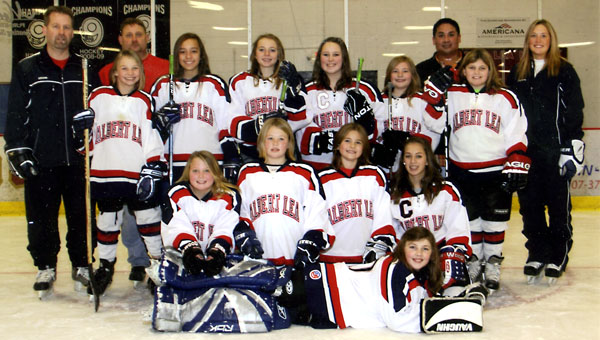 The Albert Lea U-12 girls’ hockey team beat St. Peter/LeSueur, Austin and Luverne this month. The team travelled to New Richmond, Wis., to play in a tournament on Saturday and Sunday. -- Submitted photo

Albert Lea’s U-12 girls’ hockey team is on a three-game winning streak that began on Jan. 8 with a 6-4 victory over St. Peter/LeSueur at City Arena.

Kylie Sundve scored her first goal of the season with an assist from Maddy Carstens. St. Peter scored with four minutes left in the first period to tie the game, but in the second, Madison Herrera scored her first of three goals to regain the lead.

Sky Anderson made 25 saves to secure the win, and Adsion Malakowsky played strong defensively and stopped opponents from scoring off an rebounds.

Hannah Johnson started the scoring in the first period before notching two more goals for a hat trick.

Maddy Funk moved from her defensive position to wing and scored her first goal of the season, while also assisting on one of Johnson’s goals.

Allyson Stanek played solid defensively, holding Austin to 15 shots on goal, and Carstens and Herrera played aggressive at the forward position and rounded out the scoring for Albert Lea.

The Tigers next game was on Jan. 14 when it dominated Luverne with 37 shots on goal and won 6-1.

Skylar Abrego was unable to play due to a broken wrist, but she was there for her team with a positive attitude and support.