The third-ranked Tigers won by pins in eight matches and won 12 of 14 overall. The team has five regular season conference duals remaining. 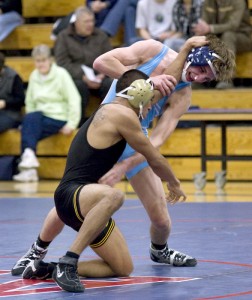 “We wrestled tough again tonight,” Tigers coach Larry Goodnature said. “Every match we wrestle against Big Nine teams we have to go out there like it’s for the Big Nine championship.”

Beau Johnsonrud and top-ranked Trevor Westerlund got the Tigers off to a 12-0 start with back-to-back pins at 106 and 113 pounds, respectively.

No. 4 Garrett Wangsness then notched a 13-9 decision over the Cougars’ Ricardo Fletcher.

“That was one of the better matches of the night,” said Goodnature of the 120-pound matchup. “Garrett wrestled great against a tough kid.”

At 126 pounds, Dakota Wangsness won a 10-6 decision over Leon Fletcher, and Tylor Nelson and Lucas Hansen earned consecutive pins before Spencer Carstens scored a decision to give Albert Lea a 33-0 lead.

The Cougars recorded its first win at 152 pounds when Cody Lorentz won an 11-6 decision over the Tigers’ Bany Chan, but Jacob Tyler (160), Dustin Samudio (182) and Tayler Blake (195) all recorded first-period pins and Triston Westerlund (170) won by forfeit to extend Albert Lea’s lead to 57-3. 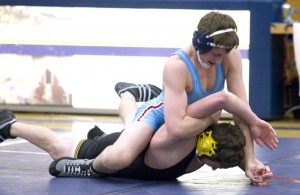 “The whole bunch wrestled well,” Goodnature said. “It was a good win for us.”

The Tigers wrestle again on Saturday in a tournament in Maple River.