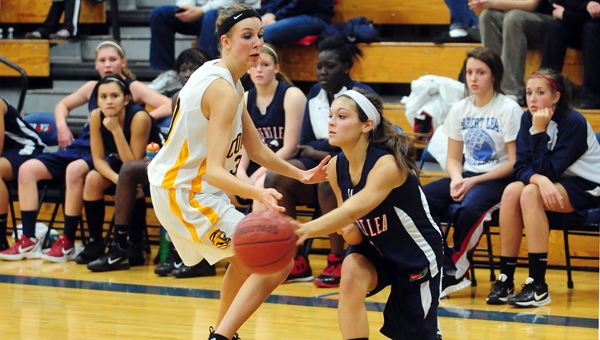 The last time the Albert Lea girls’ basketball team faced Mankato East, the Cougars blasted the Tigers’ fullcourt press and ran away with a 105-79 win.

The Tigers played a 2-3 zone throughout the entire game on Friday and held the Cougars to just 49 points with five minutes remaining. Albert Lea was as close as five points during the second half, but East closed the night on a 19-10 run and won 65-45.

“You know I love to press, that’s who I am,” Tigers coach Gillam said. “But we tried it last year. We figured if we wanted to put on a big show we could try to go up and down, that wouldn’t have given us a chance to win the game.”

Bryn Woodside had 16 points and four assists, and Sydney Rehnelt added 12 points and eight rebounds for the Tigers, who collected 21 offensive rebounds and had a 54-45 advantage on the boards.

After falling behind 8-1 two minutes into the game, the Tigers outscored the Cougars, who are the Big Nine Conference’s only undefeated team, 25-20 over the next 14 minutes to pull within 28-26 with 2:19 remaining in the first half.

Rehnelt and the Cougars’ Hannah Whitington exchanged 3-pointers, and with the Tigers trailing 24-15, they went to the foul line three times on three consecutive offensive rebounds to pull within 24-20. Dominque Villarreal got a steal and layup to cut the Cougar’s lead to two, but East went on a 10-2 run to end the half on top 34-26.

Brittani Zuniga made a layup, and Woodside hit the front end of two free throws as Albert Lea went on a 5-2 run out of the break, and held the Cougars scoreless for the half’s first 3 1/2 minutes to pull within five with 12:25 left in the game. It was the closest the Tigers came, though, as the Cougars outscored Albert Lea 29-14 the rest of the way.

“I was proud of our girls tonight,” Gillam said. “But we have trouble finishing and that comes from anxiety when it becomes later in the game and the score starts to slip away. I wish I had a timeout after each possession at that point.”