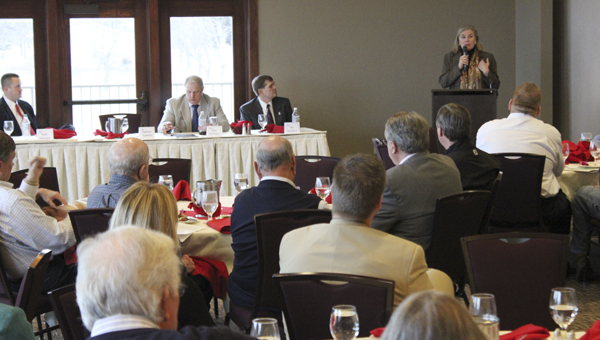 A senior jobs adviser to Gov. Mark Dayton on Wednesday said the governor is tired of elected officials talking about changing the state’s business climate and said he wants to do make changes this legislative session.

“The fact of the matter is our toolbox has only a few tools in it,” said Kathryn Tunheim, CEO of Tunheim Partners and adviser to Dayton, “and we need more tools.”

She spoke Wednesday at Wedgewood Cove Golf Club in Albert Lea at the annual luncheon of Greater Jobs Inc. and the Albert Lea Business Development Center.

She told local public officials and business leaders in attendance that if people want less government, they need to lower the demand on government services. The best way to do that, she said, is “get people into jobs.”

She said good business climate should be measured not based on what is good for business but what creates jobs.

“That’s an important distinction,” she said.

Tunheim advocated for overhauling the state tax code, with the goal of having the new one set for 2013. She said Myron Frans, the new commissioner of revenue, agrees with Dayton’s hopes of making the tax code more fair.

Tunheim said the tax code has “decades of Band-Aids and one-off ideas” and incentives and disincentives.

“The governor’s view is it’s not fair,” she said. There are many arguments about the tax code, some for the present structure and others against, but she said it all “depends on whose ox is gored.”

She said Dayton has worked hard on listening to people from the business community and to a wide variety of viewpoints.

“The governor is very willing to spend time with people who don’t agree with him,” Tunheim said.

She pointed to three main jobs of the state when considering tax reform:

She said it shouldn’t have taken a bridge collapse to bring attention to the crumbling roads, bridges and other public works.

Tunheim said one problem with infrastructure is “the numbers are so huge that people don’t want to talk about it.” But, she pointed out, that doesn’t make the problem go away.

She said the governor has asked business leaders: “What do you think you will need?” and “When do you need it?”

Minnesota needs to address the wide disparity in education between people of color or poverty and the rest of the population.

The people without jobs primarily are in three groups, Tunheim said: military veterans, construction workers and unskilled, urban poor. She said the administration wants to aim at those populations.

Minnesota needs better collaboration among the private, public and philanthropic sectors, she said.

Tunheim hinted at what’s to come for Workforce Development, saying the agency will see a “dramatic redesign over the next few years.”

She added that, regarding exports, Minnesota “needs to be a globally relevant competitor in the marketplace.”

She said if Minnesota wants to be a place to grow business, then it needs to get people what they want from government more effectively and with less red tape. She said Dayton wants to toss out many old, outdated rules and make doing business simpler and easier than at present.

She also mentioned how the governor wants to address a particular difficulty legislators have, especially with tax codes. She said the legislative intent when laws are passed turns “completely ridiculous” during the implementation.

House District 27A Rep. Rich Murray said he was excited by Tunheim’s speech because it reflects what he wants to get done this session: reform corporate taxes and create jobs.

“Like she said, I’m tired of talking about it and I want to do something,” he said.

Murray, who is part of the Republican legislative majority, said he looks forward to working across the aisle — Dayton is a Democrat — when the legislative session begins.

“We might get the best ideas working together,” Murray said.