Roxann Bruner, of River Falls, and Jared Palmer, of Minnetonka, were married at 4 p.m. on Oct. 1, 2011, at the amphitheatre at University of Wisconsin-River Falls. The Rev. Milton Ost performed the double-ring ceremony. 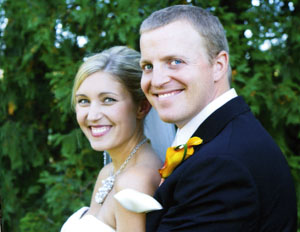 Parents of the bride are Michael Bruner, of Baldwin, Wis., and Debra and Jerry Gedney, of River Falls. Grandparents are Richard and Marge Bruner, of St. Croix Falls, Wis., and Paul and Irene Larsen, of Gaylord, Mich.

Parents of the groom are Bruce and Pat Palmer, of Albert Lea. Grandparents are Juanita Palmer, late Clayton Palmer and the late Wini Nolting.

Violinist was Sarah Bersch. Scripture reader was Pat Palmer, mother of the groom.

Roxann is a graduate of Hudson High School and is employed at Prime Alliance Solutions in Edina.

Jared is a graduate of Albert Lea High School and Minnesota State University, Mankato. He is employed at Sajan, Inc. in River Falls, Wis.

A honeymoon is planned for a later date.